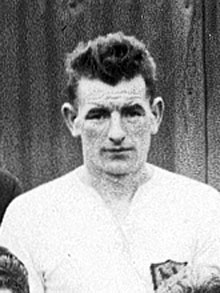 When he joined Dundalk for the 1927-28 season, Alf Jordan was returning to Ireland after four seasons in the English Leagues with Stoke City, Hull City and Bristol Rovers, making a total of 11 League appearances (Stoke 2, Hull 9).

Originally from Northern Ireland Intermediate club Willowfield, he had seen service with Distillery before transferring to Stoke City in November 1923. He spent his first Dundalk season at centre half, moving to right halfback for the 1928-29 year when Sam Patton took the centre half spot.

After his Dundalk stint he returned to England, playing as an amateur with Barton Town. When his playing days were over he returned to Hull where he worked with William Jacksons Bakery, turning out occasionally for the work’s team. His younger brother Davy also played with Hull City and in 1937 was twice capped for Ireland while with Wolverhampton Wanderers.