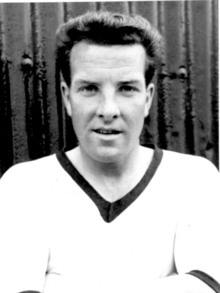 Billy’s Dundalk role in the first half of the Championship-winning season was usually at inside left, moving to the wing when Pownall was absent. After Stan’s injury in the middle of December knocked him out for three months Billy became the automatic choice for the left wing spot, moving inside on Stan’s return for the last 4 games.

He played a crucial role in the last match of the League campaign when his 87th minute goal at Dalymount Park against Bohemians opened the door for Francie Callan’s last minute equaliser, securing the single point necessary to take the League Pennant.

His only first team appearance during the 1964-65 season was in the replayed final of the Presidents Cup against Shamrock Rovers in early November. He scored once in the 4-2 victory at Dalymount Park, suffering concussion in the process and putting an end to his season.

During Dundalk’s memorable 1966-67 season, Billy was down the road at United Park with Drogheda, in the company of two of his 1963 Championship comrades, Leo O’Reilly and Jimmy Hasty. He returned to Oriel Park in 2003 for a 40 year Re-union of that equally memorable year.