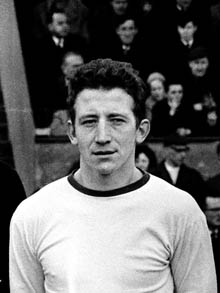 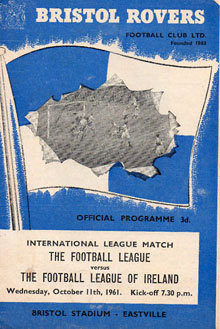 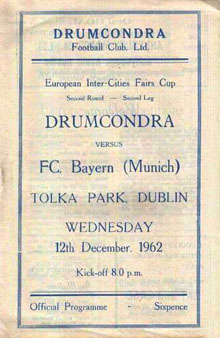 After one season with schoolboy team Seaview Rangers, Drumcondra-raised Alf Girvin joined the Home Farm Schoolboy set up and stayed with them for nine years. He was on the winning Farm team that won the FAI Youths cup in 1951-52, defeating Cork team Tower Rovers in the final, and coupling that with the Dublin Schoolboy League Championship.

Three years later he added another League –Cup double, this time at Junior level–combining an LFA Junior League award with an FAI Junior Cup medal, and scoring the equaliser in the final against Belgrove.

In 1957-58 he made his League of Ireland debut with Bohemians, and also earned an Amateur International cap against Holland, before transferring to Drumcondra for the 1958-59 year.

Although he won a League Championship honour in 1960-61, he failed to land a rare trio of Cup Medals when Drums lost out to St Patrick’s Athletic in the FAI Cup final in the same year.

In the summer of 1961 he had Mick Burke from Shamrock Rovers as a teammate when he played in the Canadian National League with Toronto Ukrainians and was selected on a League All-Stars team to play a visiting Russian club.

By the time he left for Dundalk in the summer of 1964, after six Drumcondra seasons, he had collected all the League of Ireland competition honours—League, Shield, City Cup, Top Four, Leinster Cup—and had a half dozen appearances in European competitions against Athletico Madrid, Nurembourg, Odense and Munich.

In addition, he had made half a dozen bench appearances with the Irish International team as understudy to Noel Cantwell. [Drumcondra 1958-1964 League apps 89; FAI Cup 16; Europe 6]

He was signed by Dundalk to take the place of John Murphy, who had been transferred to Glenavon. A Dundalk ever present until an October injury, he returned for the St Stephens Day loss to Home Farm in the Leinster Senior Cup final, but shortly afterwards had to make way for reserve player Patsy Cole.

He was released at the end of the season and spent the next year with Drogheda United, finishing the 1965-66 season as player-coach, before retiring.

After serving his time as a motor apprentice, Alf had moved to Stanley Wood and Burney as a mechanic, before starting his own business.

A keen golfer, he is a past captain of the Irish Professional Footballers Golf Society.