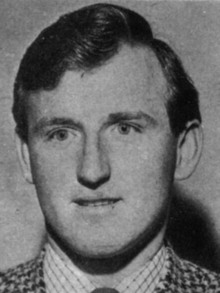 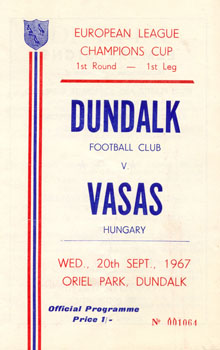 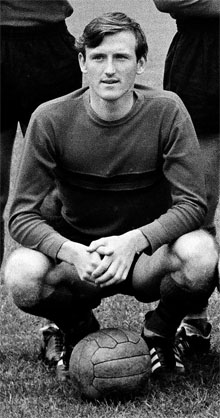 The Bohemians club of the early 1960s, although enjoying little success on the field, was a nursery for future stars of the League of Ireland and the English Leagues. Ex-St John Bosco Larry Gilmore joined the Amateurs in the 1962-63 season and spent four seasons in the company of Willie Browne, Jimmy Conway, Turlough O’Connor, Kevin Murray and Ben O’Sullivan.

When Sean Thomas took charge in 1964 there was a dramatic improvement in the Amateurs fortunes and over his last two seasons Larry shared in the successes. When he came to Dundalk in the summer of 1966 he was the holder of International caps at Schoolboy, Youth and Amateur level and had a Leinster Senior Cup medal won in 1966.

A near ever-present in the early part of the season playing on the right wing with Dundalk—he played in all 11 games in the Shield victory march—he lost out after the arrival of Derek Stokes and participated in just three games in the victorious League campaign. He returned to first team duty for the end of season Top Four Cup win.

A versatile player, he became a utility man, filling in at midfield and on the wing when required, performing equally well in defence and in attack. His obvious appetite for the game and his willingness to work made him a popular player with supporters. He was more active in the following two seasons, collecting City Cup medals in each term, and he featured in seven of the club’s European competition games.

In his last season half of his appearances were as substitute and he left at the end of the year to spend one final LOI season at Sligo. During his ten League seasons from 1962-63 to 1970-71 he was credited with League scores in eight of the seasons.

Irish Press: “Has excelled when given a first team berth …. Alert and willing ….his raiding and challenge can disturb the most closely-knit defence…. Packs a great shot”