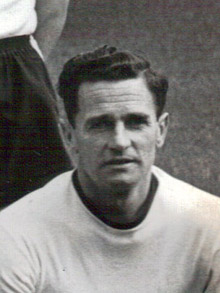 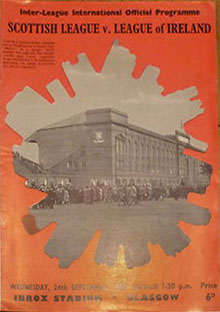 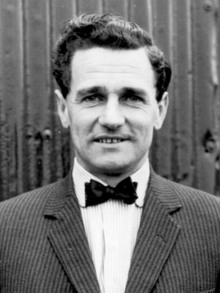 Starting in 1952-53, inside forward Dermot Cross had seen action with four League of Ireland clubs, Bohemians, Transport, Drumcondra and Shamrock Rovers before his January 1962 arrival at Oriel Park.

In addition he had been with Bray Wanderers for the 1955-56 year, where his opening goal was the outstanding feature in Bray’s 2-0 win over Workman’s Club in the final of the Intermediate Cup. He also represented the Leinster Senior League selection in its bi-annual fixture with the Lanarkshire League.

Formerly of Rathfarnham, Home Farm and Shamrock Rovers Schoolboys, his scheming and shooting power made an immediate impact when debuting with Bohemians in November 1952.

With Drumcondra for the 1956-57 season, he was regularly on the score sheet in the League and he also scored a hat-trick in the 5-1 first round FAI Cup defeat of Longford Town but he failed to make the final starting line-up, losing out to Jackie McCourt for the inside left spot when Drums got the better of Shamrock Rovers.

After a season with Distillery in the Irish League, where he linked up with another ex-Shamrock Rovers colleague Liam Munroe, he switched to Drum’s arch rivals Shamrock Rovers, being the leading Milltown League scorer in the 1959-60 year.

In 1958, when he was with Drumcondra, he had been twice honoured with selection for Inter League duty with the League of Ireland, losing unjustly in September to the Scottish League by a single goal at Ibrox Park with less than three minutes remaining, and defeating the Irish League a month later at Windsor Park.

The 1961 St Stephen’s Day loss of the Leinster Cup to Drumcondra was an expensive one for Dundalk after Jimmy Hasty and Liam Munroe had suffered injuries that kept them out until March. Within two weeks Dermot Cross arrived, scoring once and making one on his debut against Cork Hibernians.

Playing at inside right, his ball skills, dribbling ability, close passing excellence and his great football brain made him a key member of the 1962-63 League Championship team. His understanding with inside partner Francie Callan and centre forward Jimmy Hasty opened many defences and he contributed 6 goals to the League triumph.

In an end of season friendly against Glasgow Celtic he was judged man of the match after inspiring a Dundalk comeback from 4 down to a 4-3 loss. His magnificent display, one of the best ever witnessed at Oriel, attracted the attention of Celtic manager, Jimmy McGrory, who attempted to sign Dermot after the game, thinking he was in his teens, to discover he was dealing with a 32 year-old!!

Switching to inside left for the following year, he scored the first goal in the historic away leg victory (2-1) against Zurich in the European Cup, when Dundalk became the first Irish club to secure an away victory in European club competition.

He finished his club career in style when Dundalk prevented Shamrock Rovers from a trophy clean sweep, taking the Top Four Cup, the last competition of the 1963-64 season.

Were it not for a powerful performance that season by the Hoops the Dundalk haul would have been larger—the club had to be content with runner up slots in both the League and Shield. Dermot closed his League of Ireland career with a short spell at Sligo Rovers at the end of the 1964-65 season.

What They said About Him

Irish Independent’s Sport Star of the Week Jan 11th 1963 “for his outstanding game against Limerick” in a 3-0 win the previous week on the way to the 1962-63 League Pennant.