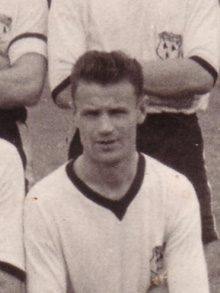 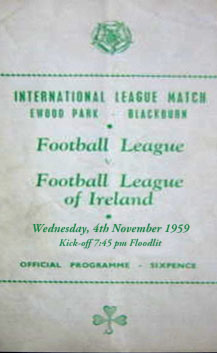 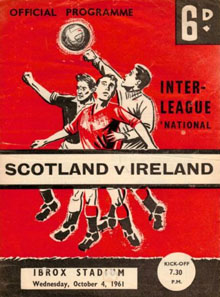 From his schoolboy days with Norton Villa and Bendigo in the local leagues it was clear that winger Willie Coleman with his combination of pace and ball skills had special talents.

Sam Prole brought him to Drumcondra in the 1954-55 season—by season’s end he had an FAI Minor Cup runner up medal, scored twice with the Irish Youths against Liverpool Youths at Goodison Park and had also scored twice on his League of Ireland debut in a late season trip to Limerick. He finished his initial League season with three goals from three appearances.

Over the following five seasons he won all the major competition honours with Drumcondra: FAI Cup in 1957, (accompanied by another Dundalkman Jackie McCourt) earning a penalty and scoring the second in a 2-0 win over Shamrock Rovers, the League Championship in 1957-58 (scoring the winner three minutes from time in the last match decider against Shelbourne), and adding Leinster Cup medal 1957-58 and Presidents Cup 1958-59.

His 1959 Leinster Cup memento came at the expense of Dundalk when Willie scored once in a 5-2 drubbing. His representative honours while with Drumcondra included two Youth caps and an appearance with the Leinster League against the Lanarkshire League. He rounded these out in 1959 when he earned 3 Inter League appearances with the League of Ireland.

Signing with Dundalk in late September 1960, joining Liam Munroe, Jimmy McDonnell and Victor Meldrum, he scored on his debut against his old club Drumcondra and days later at Parkhead earned his fourth and last League of Ireland cap against the Scottish League.

A few weeks later Jimmy Hasty was landed and the entertainment value went through the roof. Within months of making his Dundalk debut he had another Leinster Cup medal—this time his old club Drumcondra were at the wrong end of a 1-0 score-line.

Injuries restricted Willie’s first season appearances but he was fighting fit for the following year, showing his full array of talents while chipping in 14 goals, missing just one game.

Coincidentally, on the traditional St Stephens’s Day fare, he lined out in his third Leinster Cup final in four years—all involving Dundalk and Drumcondra. This time he ended up with a runner up award after the Tolka Park side reversed the previous year’s result again on a 1-0 score-line.

The following year he moved to England to work, where he played with Romford (Southern and East County Leagues) and Chadwell (Essex Sunday Combination). Returning to Ireland in the early 1990s, he lived for a while in Arklow, before relocating to Dundalk.