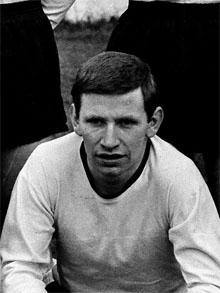 Ray Bushe was one in a long line of ex-Drumcondra players to come to Dundalk in the late 50s and early 60s.

Ranelagh-born, he was with Belgrove when he was spotted by Drumcondra scouts. He made his mark with Drum’s Reserves as a free-scoring inside-left, before making his first team debut in the run in to the 1962-63 League Championship, when Dundalk finally headed Drumcondra and Waterford by a single point.

For the season-closing Top Four Cup he scored the lone goal in the semi-final against Dundalk and then scored in both the 2-2 final against Cork Celtic and the 4-3 Drums victory in the replay at Turner’s Cross after extra time.

These heroics earned his place with the Irish Amateur squad that played in 1963 in the 4-country FA Centenary competition, alongside Timmy Lyons, John Murphy and Patsy McKeown. After a big clearing out at Tolka Park following a poor 1963-64 year, Ray was one of half-a-dozen ex-Drums to make their way to Oriel Park.

Highlight of his first Dundalk season was his role in helping to deliver the Presidents Cup, defeating Shamrock Rovers in the final. Coming on after half an hour for the concussed Billy Kennedy, his 72nd minute score broke the 2-2 deadlock and Jimmy Hasty made it 4-2 for an outstanding victory.

Although mainly lining out at inside left, he was frequently called upon for the left-half back and left wing positions. A late flurry of goals in the 1965-66 year (7 in the New Year) with Paddy Turner in the inside right role, gave him the leading marksman award for the season, but it was not sufficient to keep him on for the 1966-67 League Championship year.

With St Patrick’s Athletic that year, he moved to Reserve Division Athlone Town for the 1967-68 year. Over the following two seasons he helped Athlone to victories in the Castrol Cup and the Blackthorn trophy, successes that paved the way for their election along with Finn Harps to the League of Ireland in 1969.

He stayed with Athlone for their first two League seasons of 1969-70 and 1970-71. In their first Senior season they landed the Leinster Cup and Ray played a leading role, scoring in three of the ties, including the 4-0 Final victory over Shelbourne. After quitting the professional scene he turned out for Ringsend junior club Hoganville.