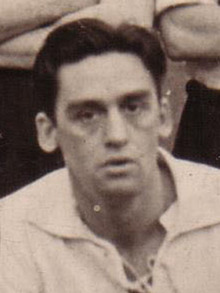 It must have come as a pleasant surprise, to say the least, to Scotch-born Jim Wilson, to find himself at Ibrox Park in late September 1948 playing for the League of Ireland against the Scottish League before an attendance of 57,000, after playing nine games with his new club Dundalk. In the previous year he had played just one League game with Scottish Division A Queen of the South, a club that finished 13th of 16 clubs.

But his Oriel Park experience was something else. An ever-present during the unbeaten 9-match Dublin City Cup, playing at inside-right, he chipped in 6 goals, all singles, when Dundalk had taken its first trophy in 5 years. Apart from the four FAI Cup games he missed few matches, but the winning Cup inside forward combination of fellow-Scots, Danny McElhinney and Eddie Hamilton, sidelined him for all the Cup games.

In the season end clearout, caused by the financial drain resulting from the high paybill, he departed for Accrington Stanley. An early season injury at Accrington in a reserve match restricted his opportunities and after the arrival of a new manager, Jim was one of several inside-forwards tried and discarded by mid-season, finishing with 4 appearances, and he left at season-end.

One of the most constructive insides we have ever had and one who is a great help to his defence. He place his passes with great astuteness. Watch the way he tackles a player in possession. He is one of the best I’ve seen for skilful ‘robbing’of an opponent. Dundalk Democrat