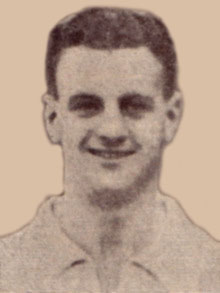 After an early season injury to centre-forward Donal Flanagan, a distress call to Glentoran led to the signing of George Sterling. He arrived in September 1945 where he joined up with his former Glens colleague Arthur Douglas. In 8 appearances for Glentoran during the 1944-45 year he had scored 6 goals.

He scored on his Dundalk debut against Shamrock Rovers in a City Cup game at Oriel Park, but in a very poor season the only consistency came from George—his name appeared on the score sheet in 20 of his 28 starts and in one highly productive sequence he scored in 11 straight starts.

Two-footed, 5’ 10” and built in proportion, he was the club’s leading marksman with 24 goals. He was suspended for two weeks after he and Shamrock Rovers Charley Byrne were sent off for fighting in the first leg FAI Cup match—George took the law into his own hands when a lax referee was offering him no protection—and he played no further part after the Cup defeat.

A very popular player and reckoned the best Dundalk player of the season, given the opportunity he would undoubtedly have been selected Player of the Year.

Before his season at Glentoran he had been with Belfast Celtic, where his 12 appearances and 21 goals had made a handsome contribution to Celtic's victory in the 20-match Irish league championship.

Playing mainly with the reserves he won a Clements Lyttle Cup medal in April 1944, scoring twice in the 3-2 final victory over Bangor Reserves. He was for many years the secretary of Dundela FC.

Democrat shortly after his arrival: “His outfield play was splendid … his strength is of the utmost value …”and after defeating Shamrock Rovers at Milltown “… Sterling made a tremendous impression on Dublin people … they thought him the best centre-forward they had seen this year … he gathered the ball well, distributed it well, shot cleverly and was terribly hard to dispossess.”