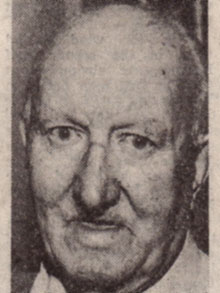 “It’s the greatest pity in the world that Charlie Reid couldn’t always remain 18 years of age” was the 1941 verdict of Joe McCleery, Dundalk’s first manager, and according to the Dundalk Democrat ‘the shrewdest judge in Ireland of a Soccer footballer’. Joe was commenting on Charlie’s performance after Dundalk had blasted St James’s Gate by 5-1 in a first round FAI Cup match in Oriel Park.

From a great team performance “….he had picked Charlie Reid as the No 1 schemer, so clever in his swerves that they never knew which way he was going to go. You couldn’t take your eyes of the big hefty inside-right…all gloss and polish…prompting Barlow and Bryan like they have never been helped before… turning so easily and quickly that the backs must have thought themselves ‘Wrong Way Corrigans’…he and Joey Donnelly had the ball going between them like a pair of jugglers.”

In a decade with no shortage of star performers in the League of Ireland, Charlie Reid was reckoned one of the best. For ten consecutive years, starting with Brideville in the 1929-30 season, he had scored League goals with four Dublin clubs—Brideville, Dolphins, Shamrock Rovers and St James’s Gate—picked up 2 FAI Cup Winners medals (Shamrock Rovers 1936 and St James’s Gate 1938) and another 2 Runners-up medals (Brideville 1930 and Dolphin 1933).

His Brideville performances led to an offer from Blackburn Rovers but Charlie had a good job with Shell Mex on top of his football pay and turned down the opportunity to play in the English League.

He got one International cap in 1931 against Spain in his favourite inside-left position, but the likes of Fred Horlacher, Paddy Moore and Joey Donnelly restricted his opportunity for any more. Discarded by the Gate at the end of the 38-39 year he had joined Leinster League club Distillery and scored for them in their shock FAI Cup victory over Dundalk in 1940.

Dundalk’s rewards for taking him on board for the 1940-41 year was limited in terms of trophies to a runner up spot in the Dublin City Cup—Charlie had scored on his club debut in the first round against Bray.

But he played a central role in an excellent Cup run, which included a never-to-be-forgotten triple-header with Shelbourne, and which provided the financial wherewithal to sign the squad that, in the following season, finally broke the club’s FAI Cup hoodoo. He also left a lasting memory of he and Joey Donnelly stroking the ball ‘like a pair of jugglers’.

Charlie’s reward was a move to Shelbourne and another year in his long and distinguished League of Ireland career. During the mid to late 1940s he was looking after the training of the Dundalk club’s Dublin players and turned out a few times with the Reserve team, scoring the occasional goal.

One of the more colourful moments of his career arose after a particularly tough encounter against Drumcondra, when Drums defender ‘Taffy‘ Jones had been particularly rough on Willy ‘Wagger’ Byrne, a cousin of Charlie’s. After Charlie had intervened Jones called him an Irish bastard. Afterwards Charlie went into the Drumcondra dressing room, found Jones on the table and gave him a belt in the chin. For his trouble he got a year’s suspension.

Charlie ended up in the taxi business and was the father of Eileen Reid, star singer of the Cadets Showband in the 1960s and who had a very successful career as an individual artist covering all facets of show business—hit records, films, cabaret, stage musicals, pantomime and radio.