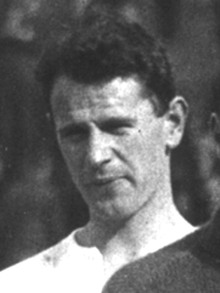 During the club’s first three seasons in the Free State League no new local players had been blooded. Tommy Godwin was the first player from the local Junior clubs to get a first team call-up. Throughout the 1930s he was one of a quartette who played a central role in the club’s activities, along with Joey Donnelly, Gerry McCourt and Henry Hurst.

He made his early mark with Norton Villa in the Dundalk Minor League in the 1920s, where Joey Donnelly was a teammate, winning the local league in its first two seasons. With a very young St Patrick’s squad he lost to Ardee team Dee United in the Junior League’s Macardle Cup.

Selected at centre forward with the Colours team playing against the first team in the annual pre-season trial in August 1929, he impressed with his two goals and made his debut against Bray Unknowns on September 1st 1929. He was called upon three times in the following season, again at centre forward, and contributed three goals.

After an absence of two seasons, he was back on first team duty in the 1933-34 year and spent the second half of the season at centre-half. Equally at home at either number 5 or number 9, and particularly strong and athletic in the air, his excellent performances earned him a place in a test match for the Irish International team during the 1934-35 season. Flanked by his brother Gerry at right half and Henry Hurst on the left, he was centre-half when Dundalk stormed to the FAI Cup final in the following year, scoring the last goal, from the centre half position, in the high-scoring final when Dundalk went down 4-3 to Bohemians.

In Dundalk’s last match in the 1935-36 season played at the Athletic Grounds, the final game before relocating to Oriel Park, Tommy scored the winner in the last minute. He played in the opening Oriel Park fixture and in that 1936-37 season he finished with seven League goals—after being drafted in as centre forward late in the season.

Injuries restricted his involvement for a couple of seasons but he was still around for the 1942 FAI Cup success and he came in for the flue-stricken Dicky Lunn in the first round victory over Distillery. After a half dozen games on the trot an injury knocked him out for a spell. He couldn’t break his way back into the first team and Johnny Leathem retained the centre-half spot for the march to Cup glory.

Throughout his thirteen seasons with the club he retained his amateur status. Employed as a supervisor by local cigarette and tobacco manufacturer P J Carroll and Company, he became a useful golfer, winning the company’s golf championship on a number of occasions.

Dundalk Democrat in the run-up to the 1935 FAI Cup final: "Brother of Jerry and another product of St. Patrick’s. Played most of his football with junior teams as a centre forward where his cleverness in heading was invaluable. Has developed into a great centre-half. Long of stride and with plenty of intelligence he holds the best of the centre forwards in the hollow of his hands. Good team man and always plays according to his captain’s orders.”