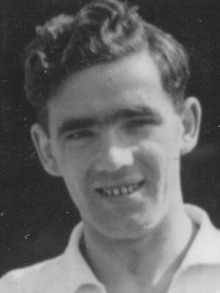 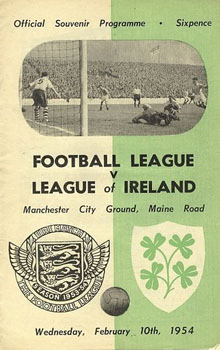 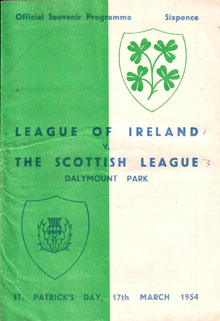 Joe’s early football experience was at Gaelic football with his school team De La Salle and later at soccer with junior clubs Demesne Celtic and St Nicks. Playing at centre forward with Demesne, he won the Summer League Cup, defeating Border Legion in the final. After switching to St Nicks he moved to full-back. He had not turned 20 years of age when making his Dundalk debut in a City Cup game against Drumcondra on September 25th 1949.

After failing to win any of the four opening League games, Joe was moved from full back to centre forward, scored twice to spark a recovery from two down to a 3-2 victory and stayed upfront for the remainder of the season, finishing as leading League scorer with 7 goals. His second season brought his first senior medal when Dundalk won the Leinster Senior Cup, after 25 years of trying and five losing final day appearances.

For the rest of his career Joe regularly filled in wherever he was required and filled every position on the field, including a period as goalkeeper when Ted McNeill was injured—and saving a penalty in Limerick! But it was as a right full back that he will long be remembered.

From his full back position he was a key member of two FAI Cup winning combinations—in 1952 with Tommy Traynor as his partner and with Ken Finn in 1958. Only he and Leo McDonagh were members of both cup-winning teams. He was three times capped for the League of Ireland and on another four occasions was selected as 12th man. Hugely popular, he was one of the most versatile players ever to have played with the club.

Soccer ran in the Ralph bloodlines. Joe’s father, Jack, was a leading player, administrator and referee in the post World War 1 period, first with the Silver Badges, later with GNR and he regularly appeared on Dundalk and District League Selections in the full back line. Ollie Ralph, Joe’s son, after moving to Newry from Dundalk in the early 1980s set Irish League and club goal scoring records that will stand for a long time.

Employed at Rawsons Shoe Factory and later at Ecco, Joe turned out with the Ecco works team after ending his Dundalk career and also spent a while at refereeing.

He undertook a considerable amount of voluntary activity on behalf of the poor and under-privileged, spending many years as President of his local conference of St. Vincent de Paul. He had a near lifelong involvement with the Dominican Church and was one of the prime movers in the formation and organisation of its Youth Centre.

For his many Dundalk fans he has multiple entries into the club’s Hall of Fame.

When he died in 2000, his 1958 team-mate Tommy Kerr seemed to many to capture the essence of Joe Ralph when he described him as “A Rotweiler on the pitch and a gentleman off it.”