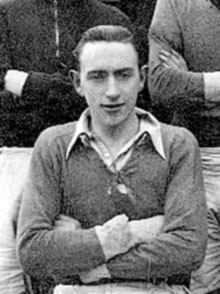 From the Point Road area, Willie Parkin was one of the most outstanding players in the local Junior League during the 1940s, playing with Avenue Celtic and later Bank Rovers. He had the distinction of scoring a hat trick for Avenue Celtic in the replayed 1942 Byrne and Maguire Cup final, only to see his side finish runner-up after Tom Agnew’s hat trick helped Central to a 6-4 victory.

His first outing with Dundalk was in Gerry McCourt’s benefit game in May 1943. An August 1943 friendly at Grosvenor Park against Distillery was the prelude to his Dundalk competitive debut early in the 1943-44 season in a Leinster Senior Cup game against Bohemians.

As a result of his continuing good form he became a season regular wearing the no. 8 shirt, switching for a while to right-half in the absence of Joey Donnelly. In a very poor season bedevilled by injuries to key players, one of the year’s features was Willie’s understanding with his winger Paddy Barlow and wing-half Joey Donnelly.

The pattern remained the same for his second Dundalk season, when he regularly switched between the right half and inside-right positions. At the end of his second club season, following the acquisition of Arthur Douglas and with Jimmy McEvoy competing for the right half slot, Willie was released and moved to Newry Town. During the 1946-47 year he was on the books of Distillery, making 4 appearances in the Regional League.

He later returned to the Bank Rovers, where, in the company of his talented centre-half brother James, further honours lay ahead in the Dundalk Junior League. He was on the Bank team that won the Leinster Junior Cup in 1951, defeating Belgrove 4-3 in the final.

Working with local boot and shoe manufacturers Rawsons from he left school until it closed he later worked with Harp Lager and with the Wynberg Shoe Company.