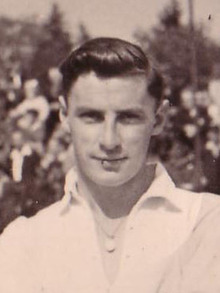 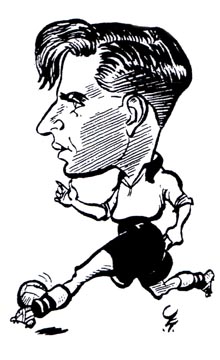 An Irish junior cap was Eddie’s passport to joining Dundalk in the summer of 1948, part of a dozen promising young players, most of whom would spend their season with the Reserves. Eddie was one of the exceptions, and he got his first team call up for a Shield match in October after left winger Johnny Walsh was injured, making his mark with goals in two of his first three appearances.

After an 8-match run he returned to the reserves in the New Year, but he got further first team action in the inside right position immediately before the FAI Cup, losing out on the march to the 1949 FAI Cup success.

He became an ever-present at the beginning of the 1949-50 season and a serious of excellent performances, culminating in a November hat trick at Dalymount Park in a 4-4 Shield match against Bohemians, convinced the Birmingham City scouts.

Within a week, in the company of Jim Higgins, he was with the First Division club. But a surfeit of good wingers at St Andrews limited his opportunities and in two seasons he made just 6 League appearances.

He came home to play with Sligo Rovers for the 1952-53 season, returning to England in the summer of 1953 and linking up again with Jim Higgins, who had moved from Birmingham City to Southern League side Hereford United.

While Higgins’s year was injury-disrupted, Eddie had 49 appearances (11 goals) and made a memorable contribution to Hereford’s run in the FA Cup, opening the scoring in the drawn tie against League club Exeter City and scoring both goals in the 2-0 giant-killing replay victory. In five FA games Eddie scored 4 goals.

At this stage his mentor while he was at Dundalk, Sam Prole, was in charge of Drumcondra, and Eddie joined Drums for the 1954-55 season. In the FAI Cup he scored against Dundalk in the first round drawn tie and again in the Tolka Park’s side 2-0 replay win.

But playing at inside-right Eddie had to be content with a runner up medal when Shamrock Rovers defeated Drumcondra in the final, thanks to a lone Liam Tuohy score—depriving Sam Prole of back-to back FAI Cup successes in his first two years at Drumcondra, having defeated St Patrick’s Athletic the previous year.

Afterwards Eddie returned to England, finishing his career with Lockheed Leamington in the Birmingham and District League. Playing mainly with the Reserves, where he scored eleven times in 18 appearances, he made a couple of notable first team appearances that included scoring in the 4-3 FA Cup defeat against Sutton Town.

As the season progressed Eddie’s appearances became fewer and finally it was announced that as a result of recurring bouts of sciatica his medical advisors had recommended that he ‘hang up his boots’.

When reporting on his retirement the Leamington Courier commented; “This likeable young Irishman did not set the world on fire while playing here, but he was a fine clubman, an exceptionally good sportsman and the type of chap who is an asset to the game. A good footballer, but he did not possess that element of robust play, which is necessary in the Birmingham League.”