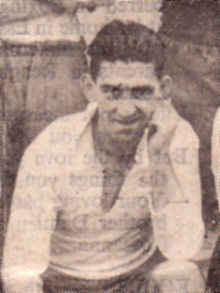 A Corkman, he had played with Cork and Waterford in the 1930s and won an FAI Cup medal in 1937 with Waterford in strange circumstances. Completely out of the blue he was selected at centre-forward—never having played in that position previously—for that year’s cup final against St James’s Gate. He opened the scoring on the way to a shock 2-1 victory.

He spent the 1943-44 season with Glentoran in the Irish League and came to Dundalk for the following season, being appointed club captain. Lining out at right full, with Jim Hearty on the left, he missed only a handful of games. One of his few absences came on a trip to Limerick in December when the club suffered an embarrasing 9-1 defeat—its biggest ever League loss.

Dundalk fans had every reason to remember Eugene. In a key game against the Gate at the back end of the 1942-43 season Dundalk, tied at the top of the League with Cork, led by a single goal with time almost up. A free kick was lobbed into the Dundalk box and the ball ended up in the back of the net.

A mixture of confusion, complaints and anger followed with Dundalk players claiming that Eugene had impeded their keeper as he attempted to reach the ball. Their appeals were all in vain and Eugene’s brother Richie collected a Championship medal when Cork, with a one point advantage, took the title. .

He spent the 1945-46 season with Ipswich Town in the Third Division without getting a first team outing and returned to Ireland, signing with Waterford for the following year, and playing at centre-forward he hit a hat-trick against Dundalk at Oriel Park on a day when Peadar Walsh scored all the home goals in a 4-3 City Cup victory.

He came out of retirement during the 1948-49 season to help the financially-stretched Waterford who early in the year had been forced to rely on amateurs and some unpaid professionals to see them through the season. Although Ritchie did not start until after Christmas, playing at centre-forward his twelve goals tied for the title of League leading goalscorer with Paddy O’Leary (Cork Athletic) and Bernie Lester (Transport).

He was the eldest member of one of the best known football families of that era. His brothers Ritchie and Paddy won all the game’s honours with Waterford, Limerick, Cork and St James’s Gate.