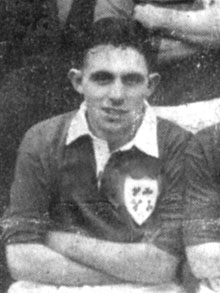 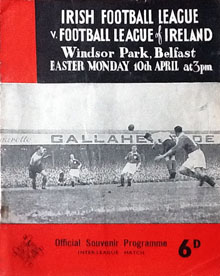 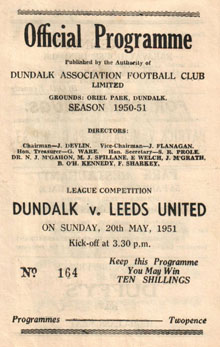 In the summer of 1948 the Committee of Dundalk FC were very busy—renovating Oriel Park, engaging a new player-coach from Scotland and signing a new team—all possible on the back of transfer fees earned for young players moving to cross channel clubs. But they also took time out to sign a batch of junior players from Dublin clubs—the future seed corn.

The 20-year old Junior International right-winger Terry Murray, from St Pauls, was one such capture. With St Pauls he had won all the honours, including both FAI and Leinster Juniors Cups and had scored two goals for the Irish Juniors playing against Scotland in Glasgow the previous April.

Against hot opposition from Shamrock Rovers, he opted to sign for Dundalk on the advice of his father, who had been approached by Dundalk supremo Sam Prole.

He and Billy Murphy were two of the new acquisitions who made it into the opening day line up and retaining their first team places during the 9-match winning sequence which delivered the Dublin City Cup.

His excellent wing play earned his selection, with four of his team mates, for the October 1948 Inter-League game against the Scottish League at Ibrox Park, where the 57,000 home supporters enjoyed a 5-1 win.

A slump in team form and a number of injuries in the later stages of the Shield brought changes. Peadar Walsh was moved to the right wing and Terry joined the reserves. He got no further first team football until the tail end of the season, missing out on the FAI Cup win.

His form with the reserves earned him selection for the Leinster League team’s annual fixture against the Lanarkshire League and he scored in the 3-1 loss at Dalymount Park.

After missing the opening three games in the 1949-50 season he took permanent possession of the right wing spot, finishing as the club leading scorer and adding three further League of Ireland appearances to his CV.

At the tail end of the season he got his Irish Cap against Belgium at Brussels, a 5-1 loss, which was also the first time the Irish team played under floodlights.

Terry was no less busy during the 1950-51 year, missing only three club games, bringing to six his appearances with the League of Ireland Inter-League team and was a key member of the team that won the club’s first Leinster Senior Cup.

By now he was supplying the bullets for Joe Martin and Pat Gallagher, notching almost 40 goals between them, and he finished the season with the Dundalk squad that participated in the Festival of Britain, playing five games in Lancashire and North Wales.

His excellent form at the beginning of the 1951-52 season drew a bid from Second Division Hull City (player-managed by Raich Carter in his last English League season), and in October he joined the growing band of ex-Dundalk players in the English Leagues, making his debut in April 1952 against Everton.

Hull converted him to an inside forward and there were only occasional right wing appearances in his 32 League games (6 goals) during his three-season stay with the Tigers. His form earned him a place on an FAI team that defeated Glasgow Celtic 3-2 at Dalymount Park in April 1953.

Competition for forward positions was very hot at Hull and in March 1954, for a fee of £3,000, he joined Bournemouth where his appearances were intermittent (13 League games, 1 goal) and he was released at the end of 1954-55, joining Kings Lynn in August 1955.

He spent a season with the Midlands League team (scoring 12 goals), where one of his playing colleagues was another Irish International and ex-Dundalk Jimmy Hartnett.

His next port of call was Bedford Town, playing in the Southern League under a charismatic Irish manager, Tim Kelly. While Bedford’s main claim to fame during this period was as FA giant-killers, Kelly had attracted a batch of ex-League players to the ranks, including Tottenham Hotspur topscorer Len Duquemin, claiming two runner-ups Southern League finishes in 1956-57 and 1957-58.

The following year, after an expansion of the League, he led Bedford to first spot in the Eastern division, and went on to defeat the Western Division Champs Hereford United in the play-off. Terry spent five seasons with Bedford, from 1956-57 to 1960-61.

Starting out as a forward he gradually drifted back to a defensive role, finishing at left half back and in his last season he frequently took the captain’s armband. He made a total of 230 first team appearances, scoring 37 goals.

After the break-up of the Bedford Championship winning squad, Terry left to take up an appointment as player-manager with Rushden Town in the United Counties League, a tier below the Southern League.

At this stage he was working with Britannic Insurance Company and, becoming increasingly effected by injuries (he had broken his ankle on three occasions), he retired from playing at the end of the 1963-64 year, after leading Rushden to the United Counties League Championship.

He continued to be involved with football, spending six years as coach with Rushden Town until the demands of his job, following several promotions, took precedence over football. He remained with Britannic for 35 years until his retirement.

One of his most recent visits home was as guest of the FAI for a re-union of ex-Internationals on the occasion of the Croke Park European Cup Qualifier game against Wales. His brother Mick had a two-season spell with Dundalk in the period 1956-58, making a total of 22 appearances.

Dundalk Democrat after Dundalk’s 5-0 win over Shamrock Rovers to virtually clinch the 1948-49 City Cup: “Dazzling … brilliant …gave a grand display … if there were any scouts watching him their mouths must have watered. His footwork is bewildering and there is no length to which this young player may not go.”