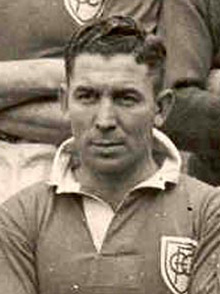 In August 1942 Dundalk travelled to Belfast to play Distillery in a pre-season friendly. The 5-4 scoreline, in favour of the home side, was typical of such games. But in other respects it was anything but either typical or friendly.

The Dundalk Democrat likened the game to a ‘miniature Donnybrook’ and laid the blame squarely on the shoulders of Dudley Milligan, scorer of four of the Distillery goals, describing his ‘neck or nothing tackles’ and ‘his upsets’ with visiting keeper Gerry Matier.

It must have come as a bit of a surprise to Oriel Park patrons when they learned six weeks later that the same Dudley Milligan was signed to play with Dundalk. He played one game, scoring in a Shield match against Drumcondra at Tolka Park in a 4-2 loss on October 11 1942.

The following week it was reported in the Democrat that the English League had banned him for life! His Dundalk CV reads Played 1 game, Scored 1 goal.

Capped three times for South Africa where he was born of Irish parents, he played with Dundee and Clyde before joining Chesterfield in 1938 where he scored plenty of goals, earning an International cap with Northern Ireland in 1939, scoring in a 3-1 loss to Wales, on a day when Ned Weir also made his International debut.

His reported lifetime ban must have been lifted because he turned out with Bournemouth and Walsall after the War.

‘Who’s Who of Chesterfield’ by Stuart Basson (Yore Publications, 1998) described him as follows:

“ Dudley Milligan made his debut against Sheffield United on November 12th, 1938, playing against the notoriously hard Tommy Johnson. After their opening few clashes Johnson had had enough, and kept his distance for the rest of the game; this was reckoned to be the only such time that Johnson had been so intimidated in his long career.

Milligan was an enigma. Likable and soft-spoken off the pitch, he was a volcano on it, and little had to happen to make him erupt. Physically, he was immensely strong, and anyone who threw down the gauntlet invariably came off worse. As often as not, Milligan started it; one of his many sendings-off came in a wartime match against Huddersfield, where Dudley set the tone for the day by kicking an opponent during the pre-match warm-up! Milligan was sent off many times during his career, suffering long periods of suspension. ”

Whatever about his temperament, Dudley was a proven goalscorer. His English and Scottish games record, which finished with Walsall in the 1948-49 season, and including wartime competitions, reads Played 173 –Scored 102.

His first Irish League club was Linfield with whom he scored 12 times from 19 appearances in the 1941-42 year. He returned to Northern Ireland for his last playing season, lining out with Ballymena during 1949-50, before returning to his native South Africa.