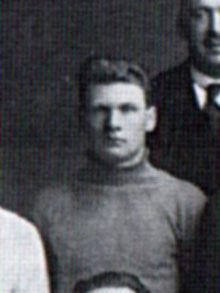 Goalkeeper Arthur Fitzroy first tasted success in the Bloomfield Junior Alliance, earning honours with Loopvale and Lendrickvale. After a couple of seasons with Palmerstown in the Alliance he moved to Loopbridge and in the 1923-24 season was with Distillery reserves, making his senior debut in November 1924.

During his four Distillery seasons he was capped for the Irish League team on two occasions in 1927—once against a powerful English League team, when Dixie Dean scored 4 goals in a 9-0 victory. He was a key player in the 1924-25 Distillery successes in both the Irish Cup and the Gold Cup and was an ever-present during the 1925-26 year.

But in January 1928, after 134 Distillery appearances, his career appeared to be finished after suffering a serious injury in an Irish Cup match which resulted in the loss of a kidney. However, after 18 months inactivity Derry manager Joe McCleery persuaded him to Brandywell and he played a few games at the beginning of their debut Irish League season in 1929-30.

He was offered a contract for the following season but Derry's insurance company refused to accept Arthur as a good risk, given he had only one kidney.

After Dundalk had played half a dozen games in the same season, leaking 16 goals along the way, Arthur took over the custodian’s job at the beginning of October and stayed for the rest of the year. His Dundalk performances earned him a contract for the 1930-31 season with Glentoran, who had an outstanding year when they were runaway winners of the Irish League and added the Co Antrim Shield to their sideboard.

A fearless and courageous keeper, Arthur also had a spell in Cork (1931-32) when the Southerners finished in runner-up positions in both League and Shield to Shamrock Rovers.

A turf accountant by profession, he was a frequent visitor to matches in the Athletic Grounds and Oriel Park throughout the 1930s.

Shortly after making his senior debut with Distillery he came to the attention of Ireland’s Saturday Night: “…shaping excellently although not yet fully seasoned. With a little more experience he should blossom into a really fine custodian. He is young, tall, alert and active—all qualities in his favour.”