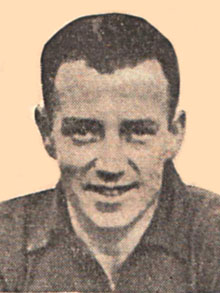 As a junior first with Orwell and later with Home Farm, the goals and the honours flowed, including a Junior International cap. He was with St Pauls in the Leinster League (Div II) when he got the call in 1938 to Tolka Park.

With Drumcondra he lined out at inside left until an injury to the centre forward saw Tommy take on the main striking role, scoring a hat-trick on his debut as leader of the attack. He was the club’s leading scorer for four successive seasons from 1939-40.

The pinnacle of his career came in the 1942-43 year when as captain he led Drumcondra—inevitably dubbed ‘McNamara’a Band’—to FAI Cup glory. He scored in four of the ties, including one in the 2-1 final victory over red-hot favourites Cork United.

Glentoran and Distillery tried to entice him north of the border, but he remained with Drums and over eight seasons he scored in excess of 100 goals, got 3 League of Ireland caps, and helped his club to win the Leinster Cup (4 times), City Cup (3) and the FAI Cup.

Early season injuries to Donal Flanagan and Willie Fallon, and a shot shy forward line, led to Tommy’s move to Dundalk in October 1945. But in January he made way for Tom Halpin, only appearing sporadically thereafter to the end of the season.

Tommy’s goalscoring days were over—but he was not the only Dundalk forward to underperform in a very poor season which saw just 9 victories from 35 matches. He finished the year on the Reserves team that won the Metropolitan Cup, but having played in most of the earlier games, he was replaced for the final by Jigger Kearney.

One of the leading Soccer journalists of the 40s and 50s, the Irish Independent’s W P Murphy, rated Tommy McNamara as the ‘best header of a ball I have ever seen. For a player of his stature—he was just 5’ 8”—it was extraordinary how he could get up for the ball against the tallest centre-halves and nod the goals that brought fame and Inter-League honours.’