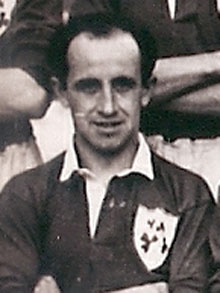 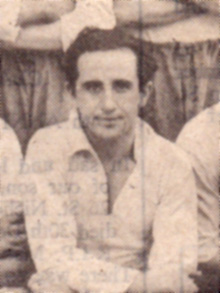 During the 1944-45 year Dundalk had two natives of the Donegal Inishowen Peninsula on its books. Right full back Paddy Byrne from Malin made five appearances, all as stand in for captain Eugene Noonan and for the following year he played with Limerick.

Emmett McLaughlin was from Moville, playing with the local Celtic team in the Derry and District Leagues, scoring plenty of goals from the centre forward position. While at University in Dublin he turned out in the 1943-44 year with both Bohemians (6 goals) and later St James’s Gate (1 goal).

On his Dundalk debut in a City Cup game against Bohemians in the opening match of the season, his ‘cheeky back heel’ completed a local comeback to an unlikely 5-4 win after being 3 down. With Willie Fallon on the left wing and Donal Flanagan at centre forward, Emmett at inside left also scored in his next two games and had 6 goals inside the opening nine games.

But in a dreadful season, when all ten away games to the end of December were lost and just one away win was recorded in the whole season, there were major changes in the New Year and Emmett, after 20 consecutive games, ended up with the Reserves.

He made just two more late season appearances in the Inter City Cup against Distillery. For the following year he lined out with Shelbourne in a few opening season City Cup games.

While studying at UCD he was on the Irish team that competed in the 1948 London Olympics pre-qualifying competition when Ireland went down 3-1 to the Netherlands at Fratton Park, Portsmouth before a surprisingly large attendance of 13,600.

He opened the 1948-49 season with Derry City, scoring 5 goals before returning to Bohemians in late February, scoring on his debut against Waterford. Although the League season was at the halfway stage, he hit a total of eight League goals to lead the Amateur’s scoring chart.

He later returned to Derry and in January 1951 moved to Portadown, where he gained three amateur caps before the season ended, against England, Scotland and the bare-footed Gold Coast team, earning the unique distinction of playing at amateur international level on both sides of the Irish border.

Now qualified as a doctor he moved to South London in the mid-1950s and died there.

After a couple of games the Democrat was reporting: “…he impressed us very much … plenty of skill … a quick accurate shot … a ninety minute player … elusive as quicksilver … his roaming tactics upsets defences … a wonderfully nippy schemer … looks good for the season.”