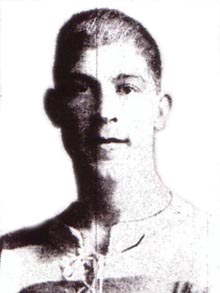 Originally from Lambeg Rangers and Loopbridge, Billy Firth had spent three seasons with Glentoran from 1927-28, making 16 first team appearances (3 goals). During the 1929-30 season he helped Glentoran 2nds to success in the Intermediate League, before arriving in Dundalk in March 1930.

He played in both wing-half positions for the last six matches of the 1929-30 season, standing in for the injured Pat Lennon at right half and his last three games were at left-half for the departed Bob Ferguson. During the successful 1930-31 year, he became the utility man and before the season had ended had lined out in six different positions.

But it was his performances at centre forward that made him a crowd favourite. He scored three League hat-tricks, all at the Athletic Grounds, one of them in a memorable comeback against Dolphins when three goals in seven minutes earned Dundalk a famous 4-3 win.

He was at centre forward for the club’s first FAI Cup final, lost in a replay to Shamrock Rovers. ‘ There is nothing scientific about him but he worries opposing backs, puts all his weight behind his drives, and never gives up trying…a dangerous customer to be knocking around…’

At the end of the season Belfast Celtic signed him and when he was selected as reserve with the Northern Ireland team that played Wales in the following December, the Democrat, referring to his all round skills, noted: ”If they needed a keeper, a full, a half-back or a forward, Billy will not let them down.” With Joey Donnelly he was a member of the Celtic 1932-33 Irish League winning squad.

Playing in of Celtic's great squads his two-season record of 82 appearances and 31 goals demonstrated his quality.In that 1932-33 Championship winning team he was ever present for all 26 League games.

Joe McCleery took him to Glenavon at the beginning of the 1933-34 year, but he transferred to Distillery in February 1934 in time to help win the City Cup before the season had ended. Over three seasons with Distillery until 1935-36 he made 56 appearances, scored 16 goals and was noted for his penalty taking.

The Dundalk Democrat, commenting on his transformation from utility defender to centre-forward: ‘Of course, you know Firth, with his ungainly gait, his method of charging with his head down and his worrying tactics. If a half-back was slow and someone called on Firth, the fair-haired boy answered the call. Recently punch was wanted in the forward line, so Firth was asked to give it. He did—a whole hogshead of it.’