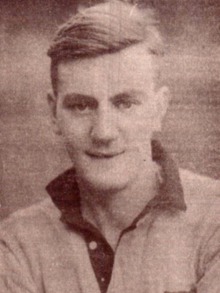 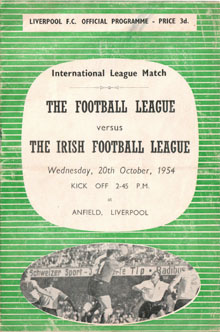 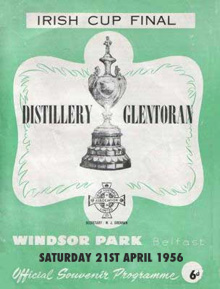 Born into a football family, Jimmy’s father had won Louth Senior Championship medals with the Geraldines in 1915 and again in 1916. Like many young Dundalk men from the ‘Upper End’, Jimmy’s early football career was under Joe McEntee, founder, manager, fund-raiser and just about every job that was required by local junior club St. Josephs.

Joining the Dundalk Reserves squad when only 16 years old, he was 18½ years old when he made his first team debut at right half on October 14th 1945 in a Shield match against Waterford, displacing the legendary Joey Donnelly who was moved to the right wing.

He became a first team regular during the second half of the following season, alternating between right half back and inside right. The retirement of Joey Donnelly at the end of the 1946-47 season paved the way for him to take over the right half position.

After 16 consecutive appearances in the following year, he became the third Dundalk player in eight months to head across the channel, following in the footsteps of Peter Corr and Joe O’Brien. Everton made the first offer of £1500 but Wolverhampton Wanderer’s representative topped that with a £2000 bid and in December 1947 Jimmy was on his way to Molyneux Park.

Under the legendary Stan Cullis, Wolves were building one of the most successful English League teams of the post-war era, and in a ten year spell would gather 3 League Championships, 3 runners up and the FA Cup.

Competing in a squad that was stuffed with household names like Billy Wright, Johnny Hancocks, Sammy Smyth, Jesse Pye, Jimmy Mullen and Bert Williams, Jimmy had to be content with reserve team football during his two year stay and he returned to Dundalk in January 1950.

He made only one appearance in the following season and in March 1951 spent a period on trial with Norwich City but a fee could not be agreed. In October 1951 he was transferred to Distillery where over the following seven years he became a crowd favourite.

Affectionately known as ‘Slasher’, he won all the competitive honours available in the Irish League with the exception of the League—County Antrim Shield, Ulster Cup, Gold Cup —all crowned by the key role he played as captain in Distillery’s 1956 IFA Cup campaign, with a final win over Glentoran after a three-match marathon.

Playing at centre forward Jimmy scored in the first game but an injury in the replay knocked him out of the decider. He was capped by the Irish League on a number of occasions including an October 1954 outing at Anfield against English League, with Walter Durkan in goals.

By the time he played his last Distillery game in February 1958 he had accumulated 176 appearances and scored 8 goals. In May 1958 he was rewarded with a prestigious joint benefit game with his long time full back partner Gerry Brennan that featured an All Star XI most of whom were former Internationals, including Ivor Broadis, Charlie Mitten and the Rowley brothers, Jack and Arthur.

A fitter with the GNR Jimmy was an all-round sportsman, excelling at table tennis (County Louth Doubles Champion), badminton (Co. Louth Singles Junior Champion) and snooker (he was a member of the successful Commercials team).

Following a great win over Shamrock Rovers at Milltown, the Democrat was full of praise for “…young McEvoy … hitting the ball cleanly and with vigour … tackling well … and continued the process of playing himself into the team.”