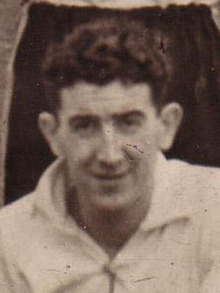 Inside forward Danny McElhinney had spent the first two post war seasons with St Mirren in the Scottish League Division A, before being released in March 1948. A call from newly appointed Dundalk player-coach Ned Weir saw him at Oriel Park for pre-season training when there was a quick dividend on the club's large investment in the ‘Scottish’ team after opening the season with a 9-match unbeaten run and landing the Dublin City Cup, the first trophy in six seasons.

And the entertainment value was high with 27 goals scored in the nine City Cup games. But after a poor Shield and an indifferent opening League run, Danny was one of those who paid the price for a poor pre-Christmas run.

After a spell with the reserves he was restored to first team duty, helping to propel the team to League leadership and to FAI Cup success. In the drawn Cup semi-final against Drumcondra he was replaced by Rusty Russell but was restored for the replay.

In the Final against Shelbourne his understanding with his right-winger Peadar Walsh played a key role in the build up to each of the goals in the 3-0 success. According to the Dundalk Democrat he had “his best game of the season and his passes were models of judgement and skill”. Notwithstanding the season’s successes, alarm bells were ringing and in the midst of a financial crisis and to the regrets of many of his fans, Danny was given his release at season’s end.

Danny’s father came from Donegal and he maintained his Dundalk contacts long after he had stopped playing, returning on holidays on many occasions. Living in Wishaw, Lanarkshire, he died in 2002.

He is very successful in his collection and use of the ball and in his positional play … can open up defences with his shrewd passing … very neatly takes any scoring chances that comes his way … never showy … always uses the ball well … is a master of positional play… when the ball is running for Danny there is no cleverer forward in the country.” Dundalk Democrat