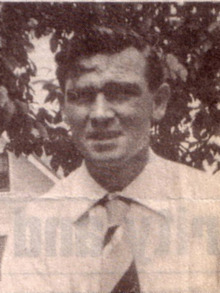 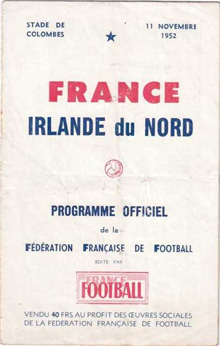 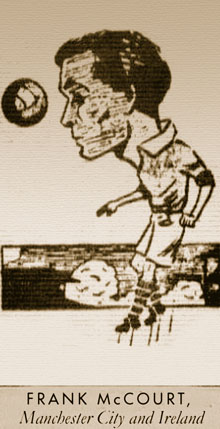 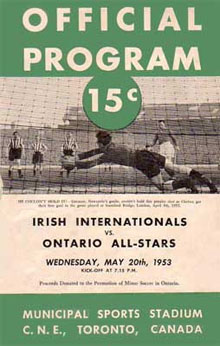 Wing-half Frank McCourt, son of club trainer Gerry, signed for Dundalk in 1941 when he was 16-years old. His war-time duties with the RAF, serving in Egypt and Italy, curtailed his playing activity to his periodic trips home.

While playing with Dundalk Reserves at the tail-end of the 1943-44 season, he was called up to the first team in the midst of an injury crisis, lining out against Distillery in both legs of the first round Inter-City Cup tie.

For the following year he was with Shamrock Rovers and in November 1945 he joined Bristol Rovers, then playing in the Third Division South.

While home on Christmas leave he lined out again with Dundalk, covering for the last minute defection of Jimmy Dykes, in a 6-2 defeat by Cork United in the Mardyke mud.

He had a loan period with Shamrock Rovers before finally breaking into the Bristol first team in September 1949, making 32 appearances and impressing a number of the big clubs.

Frank ended up with Manchester City, and after his debut in February 1951 he made 16 first team appearances as City, with a second place finish to Preston North End, gained promotion to the top division.

Four seasons at City brought six International Caps for Frank, and he was a member of the Irish FA touring party that participated in a 10-game tour of Canada in May/June 1953. During his four seasons at City he made 61 appearances and scored 4 League goals.

His last English League club was Colchester United and after a two-year stint with the Division Three South club he was released and went to the Dorset club Poole Town, playing in the Western League.

He went with Poole on a tour of Jersey in 1957 and two months later made a permanent move to Canada, where he took up employment as a prison guard in Vancouver.

Don Revie arrived at Manchester City about nine months after Frank. They became great friends and Revie was bestman at Frank’s wedding. His brother Jackie won two FAI Cup winners medals, with Dundalk in 1952 and with Drumcondra in 1957.

His father, Gerry, was a Northern Ireland Amateur International who captained Dundalk to their first League Championship victory in 1932-33 and who spent almost 40 years in Dundalk as player, captain, trainer and coach, and served as trainer to several Irish International and League of Ireland teams in the 1930s and 1940s.