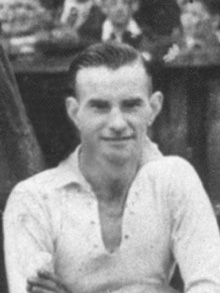 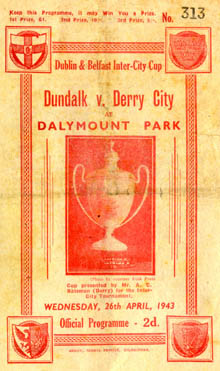 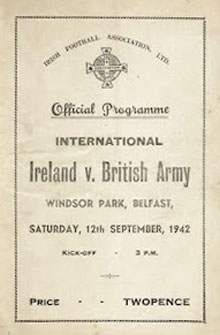 Left-winger Sam McCartney, with Irish League experience at Bangor and Portadown, was one of a group of five players signed by Dundalk from Irish League clubs for the 1941-42 season and which delivered two significant dividends—the club’s first FAI Cup victory and inaugural winners of the Inter City Cup. Arriving for the third match of the season Sam was an ever present for the remainder of the year.

Possessor of a great cross, he immediately struck up a productive understanding with Johnny Lavery and their left flank partnership was one of the cornerstones of the Cup Double victory. Between them they contributed a total of 35 goals to the season’s haul and were the architects of most of Artie Kelly’s 34 goals. Sam’s FAI Cup medal made up for his loser’s medal in the 1938 Irish Cup, when Bangor lost to Belfast Celtic in a replay.

He returned to the Irish League for the 1942-43 season with Linfield (scoring 4 in an early season match against Glentoran) where he played in the Ireland v. British Army fixture in September 1942. Second in the Blues scoring chart with 21 goals, he collected a League Championship medal, pipping Belfast Celtic by a point, and a Gold Cup medal, to which Sam contributed eight goals.

He closed the season in late May with a runner up award in the County Antrim Shield when Celtic triumphed in a second replay. The three CAS games had aggregate gate receipts of £1999!

After his very successful season at Windsor Park, Sam returned to Dundalk’s left wing for the 1943-44 year, but suffered from injuries and lost his sharpness. The following year, in February 1945, he paid one last visit to the League of Ireland when he lined out and scored with Brideville in a League game in that club’s last League of Ireland season.

From the Newtownards Road district of Belfast, Sam’s early football experiences were with Strandtown PE School XI and Dunvilles in the Amateur League. There was early recognition of his ability with his selection on the Amateur League team to play the Scottish Juvenile XI, where Sam played his part in an 8-1 hammering of the visitors.

A knee injury knocked him out of the game for a while but he made a sensational comeback with Sirocco in the Amateur League, scoring 36 goals in the 1936-37 season on their way to winning the Amateur League and Border Regiment Cup, and a very credible fourth round of the Steel and Sons Cup. This was his passport to the Bangor senior team for the 1937-38 year, and a place in the starting line-up for the final of the Irish Cup in his first season.

His Bangor form secured a contract with Portadown where he spent two seasons before the Ports withdrew from the Irish League because of war constraints. While the scoring plaudits in 1940-41 went to Benny Gaughran (42) and Davy Cochrane (30), Sam’s 11 League goals made a useful contribution to the Ports runner up spot in the League Championship to Belfast Celtic, the club’s best League achievement in its seventeen-year membership of the Irish League.

Under a headline that read ‘Bangor winger whose hobby is goal-scoring’ the verdict of Ireland’s Saturday Night in March 1938 after his first senior season was ‘…tricky and hard to hold…usually manages to finish off his work by getting the ball across at the right moment…can make the best possible use of an opening…his centres are models of accuracy…has made the left wing a live factor…should be capable of big things in the future.’