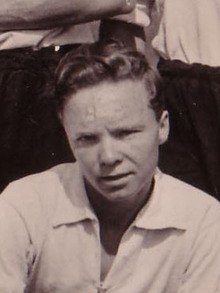 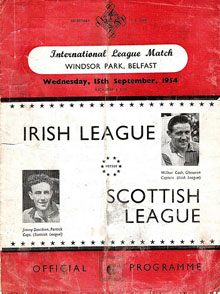 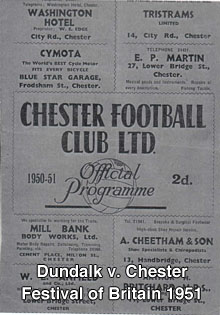 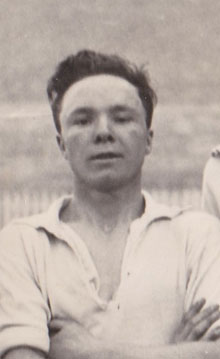 Only 5’ 4’’ tall, the red-headed Tommy McCabe had a devastating turn of speed, a powerful shot in his left foot, and valid claims on the title of the best left-winger to come out of Dundalk. His local clubs were Norton Villa Minors and St Patricks. He was with the successful Dundalk C team that annexed the Leinster Junior Shield in the 1948-49 season, he and Joe Martin scoring in the 2-1 final victory.

He was a key member of one of the club’s most celebrated youth squads that progressed to the semi-final stage of the Leinster and FAI Minor Cups and that included Harry McQuillan, Sean McCarthy, Jackie McCourt, Peter McParland, Tommy Traynor, Walter Durkan and Tommy ‘Tuckser’ Cahill.

He had not turned 17 when he made his Senior debut in the opening fixture of the 1949-50 season against Drumcondra for the President’s Cup. For the following season he had first claim on the number 11 jersey and was one of the stars of the historic first-ever Leinster Senior Cup winning team, when St Patrick’s Athletic were overcome in the final, after five final day losses stretching back to 1929.

At the end of the 1950-51 year he was a member of the Dundalk party, under player-coach Pat Gallagher, that participated in the Festival of Britain, playing against English League clubs Tranmere Rovers, Chester City, Wrexham and Shrewsbury Town, as well as Welsh club Rhyl.

For the FAI Cup-winning 1951-52 year Dundalk had a surplus of left-wingers including Fergus Maloney, Joe O’Brien and Peter McParland and Tommy got squeezed out. However he came back with a bang in the 1952-53 season and his brilliant performances—including an Oriel Park hat-trick against Transport in November—earned his selection on the League of Ireland Inter-League team but an ankle injury forced him to cry off.

He scored 15 goals from the left-wing complementing 12 from right-winger Leo McDonagh and 26 from centre-forward Joe Martin—between them they notched over 50 goals.

While with the Glens he made up for his League of Ireland disappointment when he was selected for the Irish League team to play the Scottish League in September 1954. A couple of months later he got a second cap playing against the British Army Western Division at Grosvenor Park, lining out alongside two former Dundalk teammates, Walter Durkan and Jimmy McEvoy.

After a couple of games at Glentoran at the beginning of 1955-56 he came back to Dundalk in November, and player-coach Walter Rickett moved to inside-left to accommodate Tommy on the wing. Over his five Oriel Park seasons he scored 28 goals in his 89 appearances.

Following his marriage in 1957 he emigrated to New Zealand where he joined the Wellington club, Marist Old Boys. Representative honours with the Wellington and North Island teams were followed by International honours against Australia with the New Zealand squad. He was also a member of the All-Whites squad for the 1958 tour of New Caledonia.

Continuing to play into his early 30s, by the time his career had come to a close he had 8 International All White caps, of which 5 were full ‘A’ category.

He relocated to Auckland and in 1988 he moved with his family to Australia, settling in the Gold Coast region near Brisbane where he continued to collect sporting honours—in 1998 he was the leading billiards player in the region and elected as a candidate for the title of ‘Gold Coast Hero’.

Apprenticed at Dundalk GNR Works as a bodybuilder, in New Zealand he moved to the construction industry and in Brisbane had worked as a maintenance man at a large hotel until his retirement in the late 1990s.

He returned to Dundalk in the summer of 2005, his first visit home in almost 50 years. Tommy’s brothers, Paddy and Jackie, featured on the Bank Rovers team that won the Leinster Junior Cup in 1952. Jackie played a number of times with Dundalk and spent a number of seasons with Newry Town.

In Dundalk, Tom will be remembered above all for his blinding pace, outstanding ball control and the possessor of one of the most powerful left foot drives ever to grace Oriel Park.

5 All Whites ‘A’ Internationals