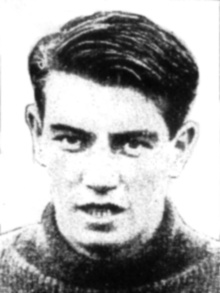 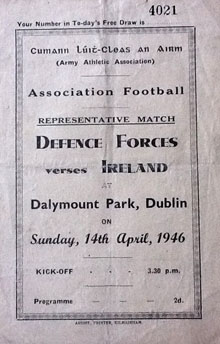 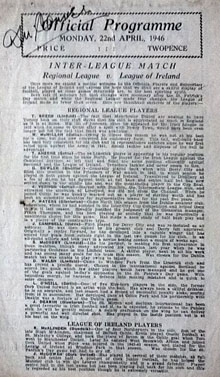 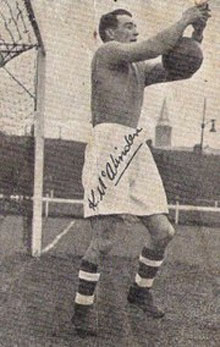 Kevin McAlinden was a member of the bookmaking family that had long associations with Belfast Celtic. He spent a period with West Bromwich Albion and after succeeding Tommy Breen as Celtic goalkeeper in 1936, he was a member of the Celts 5-in-a row League Championship-winning squad up to 1941. He was side lined with an injury in 1941, being displaced as Celtic’s no. 1 by the returned Breen and later by Hugh Kelly.

He retired from football to devote his time to developing his County Meath farm, but returned to help Shelbourne in the early part of the 1943-44 term. He played in the opening 18 matches until early December being replaced by Fred Kiernan, and retiring again. During his brief stay Shelbourne annexed the Shield trophy with just one loss.

He also answered Dundalk’s call following a serious wrist injury to Freddie Kiernan early in the 1945-46 year, after three alternative custodians had been tried. His performances for the rest of the year brought him another Inter League call up in April 1946 against the Irish League as well as selection for an FAI XI that opposed an Irish Army team in a prestigious end of season exhibition match.

Twelve months later he was adding another Irish Cup winner’s medal to his collection when Belfast Celtic got the better of Glentoran in the final. He turned out with Coleraine for the 1947-48 year and he was on the losing side in that season’s Irish Cup final against Linfield.

For Celtic’s last season before their withdrawal from the Irish League, Kevin was again back at Celtic Park as first-choice keeper and was one of those attacked by Linfield supporters at the end of the infamous 1948 Boxing Day derby, which ultimately led to the demise of Celtic.

After gaining an amateur cap against England in February 1947 he was selected on the Great Britain squad for the 1948 Olympics, appearing in two games: a 1-0 second round win over France was followed by a 3-1 semi-final loss to Yugoslavia.

He was a member of the Belfast Celtic party that travelled to the USA in April 1949 for a 10-match tour, the feature of which was the defeat of the Scottish International team and which turned out to be the club’s ‘last hurrah’.

As well as an Irish Cup runner-up medal with Coleraine in 1948, he had been on three Irish Cup winning Celtic teams: 1937 when Jimmy Turnbull scored a hat-trick against Linfield; the 1938 victory over Bangor in a replay and finally in 1947 when Charlie Tully scored the lone goal against Glentoran.

A son of Hugh McAlinden, Chairman of Belfast Celtic, Gaelic football was his first game and while at St Malachy’s College he represented Ulster to success in the All-Ireland Inter-Provincial Colleges Championship. During two seasons at Celtic Park with the Seconds team he won every junior trophy that was available and in the 1935-36 season was capped on the Irish Junior team against Scotland. He also spent period on the books of Manchester City and West Bromwich Albion.

"In many goalkeepers intelligent anticipation is the secret of their success and young McAlinden can see as far ahead as most players. It is a surprise shot that catches him unawares; his work is of the clean variety; has a very safe pair of hands; combines any amount of daring with his skill; he should go far in the game." Ireland’s Saturday Night [Aug 1936], reporting on McAlinden’s move to Manchester City.