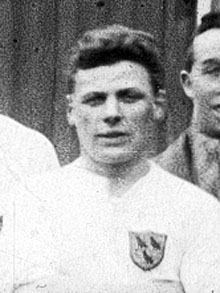 For his two club seasons, Bob Ferguson was the automatic choice at left half, usually playing alongside Sam Patton at centre half. For a short spell he swapped places with inside left John Mathieson, but that experiment was quickly ended, and on a number of occasions he switched wing-half spots with Billy Emerson.

The Dundalk Democrat’s description was: “Constructive…neat…brainy….a good worker”. In his first season he played a key-role in the seven-match Leinster Senior Cup campaign when Dundalk reached its first senior competition final, only to lose in the final to Shamrock Rovers in a replay.

Only he and Sam Patton from the 1928-29 squad were re-signed for the following year. At the end of his second season he was selected on the League of Ireland team to play the Irish League, when Joe Bambrick supplied four goals at Dalymount Park in a 6-1 win for the Northerners.

He had been with the successful Ards 2nds in the IFA Intermediate League until financial circumstances forced their withdrawal and for the 1926-27 year he ended up with Belvoir.

Another change in the following year saw him start the season with Dundela, another Intermediate team, until he was approached by Irish League Barn United. Unfortunately he again found himself without a team with the demise of the Carrickfergus outfit at the end of that year. Joe McCleery convinced him to throw in his lot with Dundalk for the 1928-29 term.

In a May 1928 season end review in Ireland’s Saturday Night he was described as ‘…while not of great height, he has successfully competed for possession with opponents inches taller…is sturdy and strong…a good tackler…a grand fetcher and carrier for those in front of him…more will be heard of him ere his career finally comes to an end.’