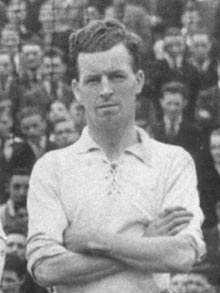 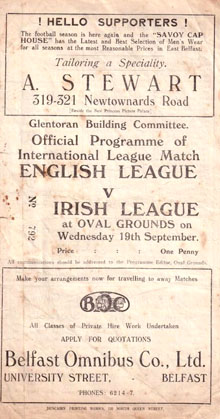 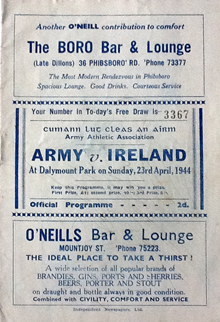 Johnny ‘The Hack’ Leathem played at centre half on Dundalk’s historic first FAI Cup winning team in 1942, which he added to the five Irish Cup medals he had previously won.

He was also a member of one of the club’s most celebrated half-back lines of Joey Donnelly, Leathem and Frank Grice. By the time he came to Dundalk he was already a Belfast Celtic Legend. With Celtic he had done it all—5 League Championships, 3 Irish Cups and an International Cap in 1939 against Wales.

A Dromore man, it was while with junior club Gilford Crusaders in the 1931-32 season that Belfast Celtic manager Archie Heggarty tried to sign him but Glenavon got to him first. However after a short spell at Mournview Park he was released and Glentoran moved in—two months later he was in possession of his first Irish Cup medal.

With the Glens he had won two Irish Cup medals—his first in 1933 playing at left-half behind the 19-year-old Peter Doherty, soon afterwards to be transferred to Blackpool and fame—and a second one in 1935, in the company of two ex-Dundalk players, Gordon McDiarmid and Ben Lewis. He joined Celtic from Glentoran in 1936, having earlier earned Irish League selection in 1934 against the English League.

A key member of one of Belfast Celtic’s finest squads, Johnny collected five successive League Championship medals from 1936-37 to 1940-41 and three Irish Cup medals (1937, 1938 and 1941). During that same spell just about every other trophy was regularly in the Celtic Park trophy cabinet.

In January 1940 Celtic’s Peter O’Connor scored eleven goals in a 13-0 defeat of Glenavon—Johnny scored one on that occasion. The emerging talents of Jack Vernon saw Johnny revert to the left-half position and in the summer of 1941 Celtic agreed to his Dundalk transfer.

A very popular player, he rarely missed a game during his four-season stay at Dundalk and he was twice honoured with selection to the League of Ireland team, joining a select band of club players who earned Inter League honours on both sides of the Border.

In April 1943 and again in May 1944 he was selected on the FAI XI teams to play in prestigious end of season games against the Irish Army.

He had an excellent understanding with his keeper Gerry Matier and following an injury to Gerry in the 1943-44 year he took over as custodian for a number of games. At a touch over 6 feet tall, he proved adept at high balls. Scores, directly and indirectly, often came from his involvement at corner kicks and from his understanding with ace corner taker Paddy Barlow.

He earned three competition honours while with Dundalk, being a member of the 1942 FAI-Intercity Cup Double team, and the following season he added a Dublin City Cup honour after Paddy Barlow’s final day hat-trick against Drumcondra. A final season (1945-46) with Derry City brought his first class career to a close.

As a cricketer Johnny was a useful all rounder who played for junior club Lurgan in the 1930s. A steady batsman and one of the team's most consistent run scorers at the time, he was also a useful support bowler.

At that time Lurgan's only participation in senior cricket was their annual invitation to play in the Northern Cricket Union Senior Challenge Cup but generally their presence only lasted one match. The exception came about in 1933 when for the first and only time, two junior teams reached the cup final, Lurgan and Woodvale.

This had added interest to football fans as the Lurgan team also included Sammy Jones who played for Distillery and facing them was Linfield stars Billy McCleery and Sammy Walker. Johnny had probably his best game for the club scoring 57 not out in the 1st innings and 30 in the second.

However, it was a lost cause as none of the other batsmen rose to the occasion and Woodvale inflicted a heavy defeat on them. To add insult to injury McCleery and Walker had brilliant performances and took both their wickets!

Johnny was one of the first recruits when the Lurgan Club restarted in 1945 and he became one of the mainstays of the team. A steady performer as an opening batsman rather than a flamboyant player, Johnny’s defence at the crease was ‘immaculate’ according to a teammate of that post war era. An excellent all-rounder, he was a medium paced bowler and a better than ordinary fielder.

From Irelands Saturday Night: “… a cut above the ordinary … a brainy player … gets in well to a tackle … his placings are well-judged … knows that the best battle ground is in the opposition half and his men in front can always rely on his backing in pressing home an attack.”