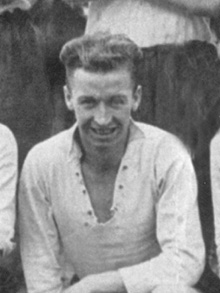 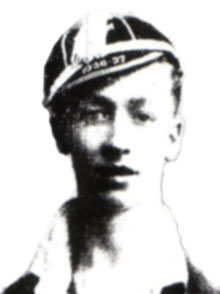 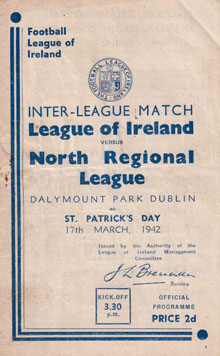 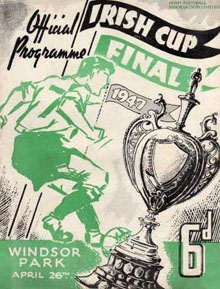 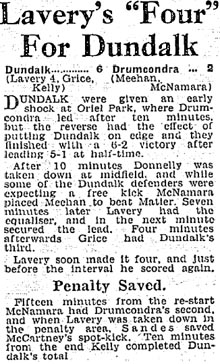 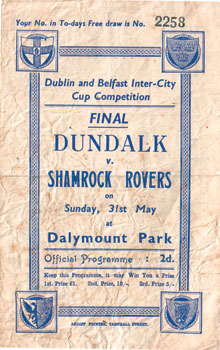 ‘Wee ‘ Johnny Lavery, of whom it was said ‘he needed a ball all to himself’, showed early promise in the Juvenile and later in the Minor Belfast Leagues with Mountcollyer. He was an automatic selection for the Northern Ireland Schoolboy International team and received a number of International caps.

A junior cap followed in 1936-37 and he made his Senior debut at the end of that season for Glentoran when still short of his 18th birthday, scoring against Ards in a City Cup fixture.

Over a 12-season span to 1947-48 he enthralled two sets of supporters with his ball skills and goal scoring, having two spells at Glentoran either side of a three-year stint at Oriel Park.

After five years with the Glens, he and team mate Frank Grice came to Dundalk for the 1941-42 year and played a major part in delivering the club’s first FAI Cup win and then added the All-Ireland Inter City Cup. Playing at inside-left he won the hearts of Dundalk supporters from his first appearance at the annual pre-season trial and then proceeded to score in each of the four opening games.

On November 30th Artie Kelly scored all four goals in a 4-1 win over Brideville, equalling the club best in a League game. Not to be outdone, Johnny repeated the feat a month later in a 6-2 victory over Drumcondra. He was the match winner in the first two rounds of the FAI Cup and his 84th minute goal in the final killed off any hope that Cork United had of making a recovery.

If his goal scoring rate showed signs of decline in his last Dundalk season (8 from 30 appearances), he promptly demonstrated otherwise on his return to Glentoran, recording 17 goals from 24 games in 1944-45 and two seasons later improved further to 32 from 52 appearances.

However his nine Glentoran seasons were distinctly unrewarding in the matter of trophies—Belfast Celtic and Linfield were hoovering up everything—and Johnny finished with just two County Antrim Shields, winning in 1939-40 4-0 against Linfield (Charlie Tizard and Billy O’Neill were teammates) and in the following season when they overcame Distillery.

Somewhat appropriately, his last Glentoran goals came at Oriel Park when he scored twice against Shelbourne (May 1948) in a second round Inter City Cup play-off, scheduled for the neutral Oriel Park after the teams had tied 1-1 over two legs.

He was almost 29 years of age when he got the opportunity to sample the English League at the beginning of the 1948-49 year, starting with Bradford City (5 Appearances) before moving to Halifax Town where he scored once in 3 starts but by November he was back in Belfast, where he finished his career with Linfield.

“Old-time followers of Soccer had a laugh at the modern generation at Shelbourne Park on Saturday where their theory of of football—on the carpet—as exploited by Lavery, proved superior to modern methods. It was the perfect dribbling of this much-criticised player that produced both scores. A twist of his body, a flick of his foot, and the way was open for the opening score. With the full back completely beaten, he dribbled to the back-line and swung the ball across to Barlow who headed to the net. For the second score he picked up a pass from Leathem, and while the defenders waited for him to pass the ball to off-side colleagues, he coolly retained possession and finished to the net.”