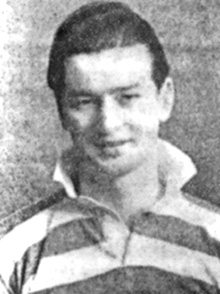 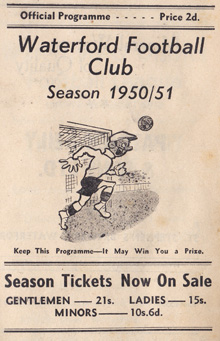 Born in Australia of Irish parents (his mother was from Downpatrick and his father from Dromara), Dan Lavery’s mother moved back to Ireland after the death of his father in an accident. Reared in Ballynahinch Co. Down, his Gaelic football exploits brought him to the attention of Glasgow Celtic.

6 feet and 12 stone weight, he went straight to Celtic from Co. Down GAA in January 1948, after a trial against Aberdeen Reserves. Lining out at centre-forward, he scored on his debut against Hibernians in April.

But the transition proved too difficult and after 4 Scottish League games and 1 goal scored, he went to Glentoran on loan in October 1948.

Then managed by Frank Grice, the Glen’s squad included future legends, Danny Blanchflower, Billy Bingham and Bertie Peacock. Dan scored 11 goals in 23 games in the 1948-49 season but failed to make the Glentoran last day lineout for the Irish Cup, when Derry City prevailed 3-1 in the final, winning their first ever Irish Cup.

At the end of the season Bertie Peacock was transferred to Celtic in exchange for Dan and another Celt Jack Greenwood.

Dan moved on to Ballymena and in February 1950 was at Oriel Park, in time to play on the losing FAI Cup team against non-league AOH from Cork. During the 1950-51 season most of his appearances were on the left wing and an arm injury kept him out of the December victory in the Leinster Senior Cup.

He went to live at Buxton, Derbyshire, and in 1954 was with the Leyland Motors team in the Lancashire Combination League.

He took up golf, reaching a six handicap, and worked for Ben Sayers, the manufacturer of golf equipment. He was just 53 years old when he died at Chorley during a round of golf.

His Gaelic football skills were honed during his school days, and while he was at St Colman’s College, Newry, he was selected on the successful Ulster Colleges Interprovincial team. With his high fielding and kicking accuracy he stood out wherever he played.

Lining out with Loughinisland at club level he played a major role in Down’s Ulster junior Championship win in 1947, scoring 4 goals and 10 points in the campaign. But shortly after his promotion to the Down Senior team he switched codes.

His Gaelic exploits were not forgotten and he was selected at midfield on the County Down Team of the Millenium.

After “The poorest soccer game I’ve seen this year”, when Dundalk lost 1-0 to Drumcondra at Tolka Park WPM in the Irish Independent didn’t think much of the Dundalk forward line: “McParland was too young and inexperienced for the ‘tight’ Tolka Park… Gallagher was too slow … Quinn was out of his class … Shortt was at sea at centre-forward … [then the good news] Lavery gave Drumcondra most worry.”