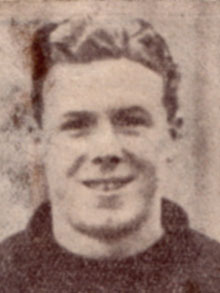 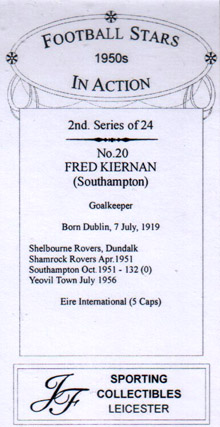 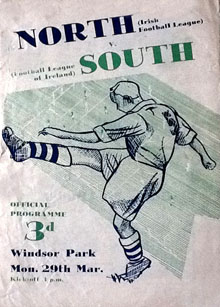 The departure of goalkeeper Gerry Matier at the end of the 1943-44 season left a significant weakness, that was not adequately addressed until the arrival of ex-Shelbourne Freddie Kiernan in the summer of 1945.

Fred’s early football was played with Drumcondra Juniors in the Leinster League, before his move to Shelbourne reserves in the 1940-41 year and his quick promotion to becoming a first team regular. He featured in the Dundalk-Shelbourne second round FAI Cup marathon that went to a second replay before Dundalk advanced to the next round.

The Reds had come close to a Grand Slam in the 1943-44 year, taking the League and Shield, but an og and a penalty miss saw them losing out to Shamrock Rovers in the FAI Cup Final. Kevin McAlinden was the early season goalkeeper until Fred took over from early December.

Only 5ft. 8 inches tall and 10 stone weight, Fred was solid and dependable, making up for his lack of height with cat-like agility. In four seasons with the Reds he made 84 appearances.

Three months into his Oriel Park career, a serious injury in a Leinster Cup tie against Transport at the end of October 1945 knocked him out for a couple of months. After a number of false starts, Kevin McAlinden arrived to take his place. When he had recovered, McAlinden’s good form kept Freddie on the Reserve team.

In consolation he won a Metropolitan Cup medal at the end of the season when Dundalk Reserves defeated Bohemians Reserves to take the cup for the first and only time.

He was an ever-present for his remaining two seasons with the club and there were frequent calls from the local press for the League selectors to recognise his talents and honour him with LOI selection.

Ironically, Kevin McAlinden, his replacement during his period of injury, was selected with the League of Ireland in April 1946 against the Northern Ireland Regional League.

His first representative honour, in the company of Peadar Walsh, came at Daymount Park in May 1947 with a League of Ireland XI against an RAF XI, with the home team victorious by 3-1.

Fred finally got his League cap in March 1948 against the Irish League. On several occasions he was substitute for the International team, for which the Dundalk Democrat noted ‘he would receive a £20 fee.’

The club failed to agree suitable terms with him for the 1948-49 year and Alex Anderson was his last minute replacement for the ‘Scottish’ teams FAI Cup success—Fred ended up with Sligo Rovers. Released at the end of the season, he signed with Leinster Leaguers Grangegorman, where he was spotted by Shamrock Rovers coach Paddy Coad.

Rovers were going through an unusually poor spell, but Fred’s qualities were again recognised by the League of Ireland selectors when he give an outstanding performance against a powerful English League XI, who were held to a 1-0 win at Dalymount Park in April 1951.

In the following month he made his International debut (v. Argentina) and before May was out he had added a second cap (v. Norway).

Later that year, and at the age of 32, he exchanged the security of the Revenue Commissioners for the uncertainties of a full time professional footballer when he joined Southampton for a then record League of Ireland fee for a goalkeeper of £4,500.

By October 1951 he had made his debut in the English League Second Division. Over the next 5 seasons he made 136 League and Cup appearances with the Saints and added another three Irish caps to his collection.

He was almost 37 years of age when he played his last Southampton game in April 1956 and the following July he moved to non-League Yeovil Town.

When Tommy Traynor’s FAI Cup performances in 1952 saw him being headhunted by Chelsea, Manchester City and Southampton, it was Freddie’s persuasive skills that convinced Tommy to head for the Dell.