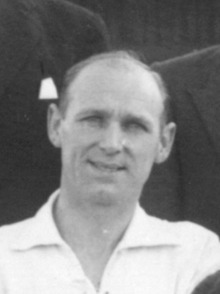 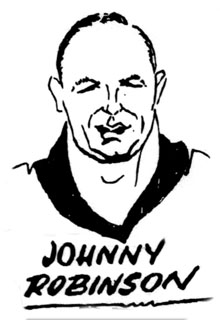 When 10-year League of Ireland veteran Johnny Robinson came to Dundalk at age 32 in the summer of 1956 from Drumcondra, he had already tasted victory in every competition of the League of Ireland —2 League Championships and 2 runners-up, 1 FAI Cup and twice on the losing side and he probably lost count of his Shield, City Cup, Presidents Cup and Leinster Cup mementoes.

Starting at right full-back, he had moved to centre-half from where he had marshalled the Drumcondra defence through one of the club’s greatest eras. Although only 5’ 9” tall, his superb timing and anticipation meant he was rarely outjumped even by the tallest opponents. In 1951 he had twice represented the League of Ireland.

A big Tolka Park clear-out in the Summer of 1956 saw him and three of his teammates—Paddy Neville, Benny Henderson and Shay Noonan—coming to Oriel Park. Always remarkably fit and injury-free, in his first three seasons he missed just 4 fixtures and over his five club seasons he became an Oriel hero. There would be no soft goals conceded when Johnny was in command and the 1958 FAI Cup success was a classic example.

No goals were conceded during the 5-match campaign, repeating the 1924 achievement of Athlone Town. In the final against red-hot favourites Shamrock Rovers he gave a masterly display of all of his skills and talents, leading by example as Rovers launched a continuous series of attacks over the last half-hour in a vain attempt to cancel out Hughie Gannon’s lone goal.

As well as marshalling the defence, he saw off four different centre-forwards during the course of the game—Paddy Ambrose, Sean Carroll, Liam Tuohy and finally Ronnie Nolan. That Cup Final’s half-back line of Leo McDonagh, Johnny Robinson and Shay Noonan ranks with the best ever to serve the club.

An incessant talker on the pitch, the great Evergreen and Cork Celtic centre forward Donal Leahy remembers Johnny as trying to ‘talk you out of the game.’ When playing against Shamrock Rovers centre forward Paddy Ambrose the conversation for 90 minutes would be about Paddy’s first love of racing pigeons!

He was particularly encouraging and helpful to the many young players who started their League of Ireland careers during his Dundalk spell. He was almost 38 years of age when he quit at the end of the 1960-61 year. When Sligo Rovers were reinstated to the League for the 1963-64 year, they appointed Johnny as coach, a role he filled for three seasons.

Employed at Hammond Lane Foundry until his retirement, Johnny who was aged 80 when he died in 2005, lived for many years in Cabra.

Irish Times after Dundalk’s 1958 FAI Cup victory over Shamrock Rovers: “Robinson was the real hero of this victory. Successive centre-forwards—Ambrose, Carroll, Tuohy and Nolan—failed to upset the cool play of the ex-Drumcondra player, who provided excellent cover for McNeill.”