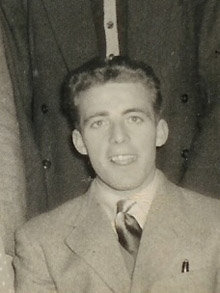 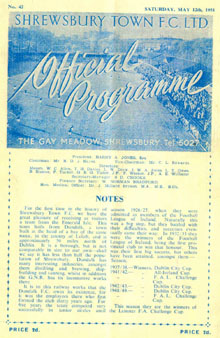 Wing-half Noel Palmer earned junior and youth international caps while with Johnville and St Patrick’s Athletic before joining Bohemians in the 1948-49 year. He had been a member of an FAI Youth panel that had competed successfully in a London Tournament, winning against Austria, and that also included future Dundalk teammates Francis O’Reilly and Billy Quinn.

He played in all rounds of the 1949 Inter City Cup when the amateurs lost in the semi-final to Dundalk and captained the Irish Juniors against England at Dalymount Park on Easter Monday 1949. He finished the season representing the Leinster League team against the visiting Lanarkshire League.

A first team Bohemians regular at the beginning of the following season he lost his place and finished the year with the reserves.

He was one of a number of ex-Bohemians players who joined Pat Gallacher’s Dundalk squad for the 1950-51 season and was at right-half back for his debut, in the opening Dublin City Cup game against Drumcondra at Oriel Park.

Halfway through the City Cup campaign he was relegated to the reserves, but immediately after Christmas, in the absence of Paddy Gavin, he was restored to first team duty.

His displays, now at left-half, made him an ever-present for the last 16 games and he closed the season as a member of the squad that played in the 5-match Festival of Britain tour. On his return he was selected on the Leinster League Selection that played against the touring Leeds United team.

Paddy Gavin’s return for the FAI Cup winning 1951-52 year saw Noel back on Reserve team duty. Following injuries to Paddy Kelly and Johnny Fearon, he got a mid-season run but was squeezed out by Cup time.

He was a lecturer in economics at University College Dublin.