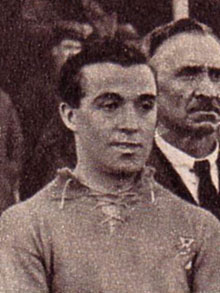 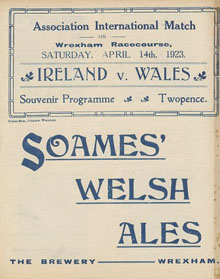 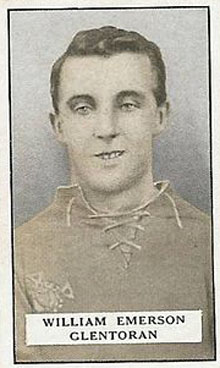 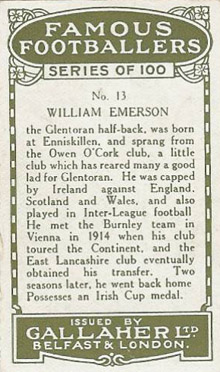 Following his first year in charge when 45 players made an appearance, but the club finances were in a healthy state after making a profit of "over £100", Joe McCleery went for experience in his second season, 1927-28, building the team around half a dozen players with English and Scottish League experience in their CVs.

The line-up was completed in the middle of October with the arrival of Billy Emerson, eleven times Northern Ireland International half back and regularly selected as International team captain. Now 36 years of age, he had received his first of four Irish League Inter-League Caps in 1914.

His football career kicked off with Belfast junior clubs Ravenhill and Owen O’Cork before he joined Glentoran in 1912. He made five appearances that first season (1912-13), scoring three goals from the inside left position in November wins over Derry City and Shelbourne.

Glentoran finished as champions that season and the following year Emerson, moved to left-half back, was part of the successful team that lifted both the Irish Cup and City Cup.

He was also part of the squad that travelled to the continent in May 1914 playing in Berlin, Prague and Budapest, bringing back the Vienna Cup. Before joining Burnley in March 1922 for a fee of £1250 he had made almost 300 appearances for Glentoran, where in ten seasons he won three Irish Cup medals, two League Championships, five City Cups, five County Antrim Shield and had earned six International Caps. In addition he played in both 1919 Victory Internationals against Scotland.

During his two years at Burnley (44 League Appearances) he added a further five Northern Ireland Caps to his collection as well as another European trip that included games in Milan, Bologna and Rome.

Returning to Glentoran in September 1924 he won his third Irish League Championship medal and by the end of the 1924-25 season had accumulated 308 appearances with the Glens.

He later spent periods with Dundela (1925-26), Linfield (1926-27) and a short while with Willowfield before his October 1927 arrival at the Athletic Grounds Dundalk.

Throughout his two seasons he provided the mid-field craft and experience that saw the club make its first impact in the Free State League, demonstrate that it could match the best Dublin teams and develop a style that proved popular with supporters throughout the country.

He was nearly forty years old when he finished his career with a second Dundela spell during the 1929-30 year. Afterwards he spent a short while as trainer with Glentoran.

Born in a village outside Enniskillen, his family moved shortly after his birth to Ballmacarrat in East Belfast, where Billy was employed as an apprentice moulder at Queen’s Island shipyards.

The Dundalk Democrat had no doubts as to his value: “Some say he is slow, but he is constructive as well as destructive….has great ball control…few halves in the League make better use of the ball…plies his team mates with delightful passes…clever and brainy…and has an exceptional throw.”