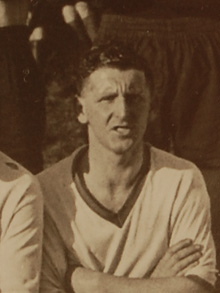 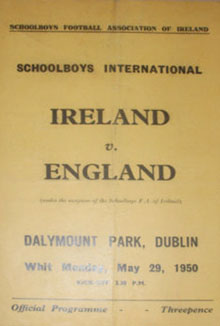 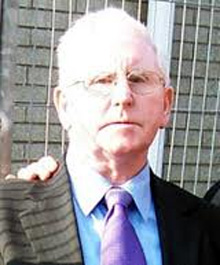 The October 1959 arrival in Dundalk of Liam ‘Mousey’ Munroe (only 5ft 4 in. tall and 9st 12 lbs.) from Distillery gave no early indication of the goal-scoring treat that Oriel Park patrons would witness in that season—after four Shield losses Liam had failed to get his name on the score sheet.

He had arrived two weeks after Kit Lawlor and it took a few weeks before the duo were operating off the same wavelength. It began to come together in the last Shield match against Transport when Liam’s hat trick and a pair from Kit gave an 8-3 win.

With Leo McDonagh and Ted Harte as the wing-half drivers, Munroe/Lawlor as the inside-forward schemers, aided and abetted by Eddie Kelly and Victor Meldrum, the New Year saw Dundalk at the top of the League. Few supporters were old enough to remember the last time that this had happened!

Along the way Liam had matched the club best of 4 goals in a League game. Two losses against ultimate League Champs, Limerick, made all the difference in the end—Limerick were three points clear of Dundalk at the finish but the club had attained its best League placing since the 1940s.

Liam had continued his scoring ways and finished with 19 League goals, topping the club’s previous best of 17 from Eddie Carroll (1928-29). In a ten-game spell he scored two hat tricks and a record equalling League-match 4. His 4-goal strike came at Dalymount Park on November 29th against Bohemians in a 6-1 victory.

For the next two seasons he acted mainly as supplier to Jimmy Hasty, but still managed another 20 goals for himself. In his last season of 1961-62, Dundalk supporters enjoyed the rare treat of a forward line that regularly had four proven goal scorers in its line-out—Munroe, Francie Callan, Jimmy Hasty, Willie Coleman—prompted by Dermot Cross, Leo McDonagh and Ted Harte.

A club record 8 wins-in-a-row pre-Christmas goal-fest raised expectations, but serious injuries to Munroe and Jimmy Hasty in the St Stephen’s Day Leinster Cup Final against Drumcondra, which kept them on the sideline until March, proved crucial.

Starting in schoolboy football with Dublin City, Liam moved to the famous nursery side Johnville, earning international schoolboy honours against England and being appointed captain for the occasion.

It was during a representative game for Dublin Schools against Liverpool Schools that he came to the attention of Shamrock Rovers and with his School’s half-back partners, Ronnie Nolan and Shay Keogh, he joined the Hoops. He made his Rovers debut at Oriel Park in September 1952, when the home side were victorious by 2-1 in a Shield match.

His performances on the right-wing with 1953-54 League Champions Rovers earned him Inter League honours with the League of Ireland against the Welsh League in September 1953, leading to his only International cap, in a World Cup 4-0 victory against Luxembourg in the following month at Dalymount Park, a month short of his 20th birthday.

Under the management of Johnny Carey he came close to a memorable debut when his beautifully struck corner kick eluded everybody and drifted against a post. Racing Club de France were keen to sign him at this time but Liam preferred to stay at home.

After two further League of Ireland Representative appearances in 1954, he suffered a bad knee injury and by the time he was ready to return to action he struggled to regain his place on a very strong Rovers squad.

A visit from Ards manager, George Easthem, convinced him to try his luck in the Irish League and a hat-trick on his January 1956 debut against Crusaders was the start of a very successful two-year spell at Castlereagh Park.

His first season ended memorably with Ards winning the County Antrim Shield—Liam scored in the replayed semi-final win over Distillery and was again on the scoresheet in the sensational 4-1 win over red-hot favourites Linfield.

His £1,500 move to Second Division Bristol was not a success, and after making 1 English League appearance (against Middlesbrough) he did not see eye to eye with new manager, Peter Doherty, and in the summer of 1958 he moved to Scunthorpe.

But an injury limited his Scunthorpe activity and in a short while he returned to the Irish League, signing with Distillery, where he linked up with former Shamrock Rovers teammate Dermot Cross, and before his October 1959 arrival at Oriel Park had made 25 appearances (13 goals) with the ‘Whites’.

After his three Dundalk seasons he returned once more to Ards during the 1962-63 season but stayed only a short while, making just 12 appearances. During his ten seasons between the Irish League and the League of Ireland he was credited with more than 120 goals.

In 1990 he emigrated to Toronto, Canada with his family, and also spent 8 years working in the USA.

Now retired, he divides his time equally between Canada and Florida, playing lots of golf. His first visit home was in March 2007 as a guest of the FAI at the Reunion of past International players before the Euro 2008 Cup match against Wales at Croke Park, when he also took time out to visit his many friends and old teammates at Ards.