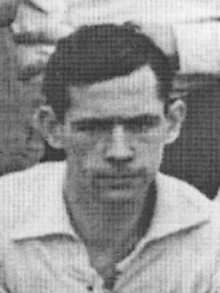 Heynestown Rovers (under Joe Kelly) and St Patrick’s Under age teams, were Gerry Mullen’s early football clubs. With a strongly fancied Bank Rovers Youths team, he reached the semi-final stages of the 1955 FAI Minor Cup, but a more powerful Drumcondra team went through on a 6-0 victory.

His first local junior success was with St Patricks, winners of the Cup in 1955, when Gerry scored in both the semi-final and final. In Dundalk’s last match of the 1955-56 season he got a late call from Gerry McCourt to travel to Waterford and made his club debut in a 5-1 drubbing.

The Cup winning 1957-58 season gave Gerry his first extended first team run, usually at left half back and he was declared 12th man for the final FAI Cup victory. For his second season he wore a variety of jerseys—nos 6,7, 8 and 10—and for the St Stephen’s Day Leinster Cup final 5-2 loss to Drumcondra he was at number 4.

After emigrating in the summer of 1959 to England he played in the Lancashire League with Marine of Liverpool and with Vauxhall Motors in the Spartan league. While employed at Vauxhall, his manager on the works team for many years was many times Irish International player and long time Luton Town stalwart Bud Aherne.

After 20 years in the UK he returned with his family to Dundalk and soon after his return he became involved with Quay Celtic in the Dundalk and District League and the Leinster Senior League, acting as manager, coach and serving a period as club chairman. In 2006 he was selected on the Dundalk Summer League team of the 1950s. He is still a regular visitor to Oriel Park, rarely missing a home game.