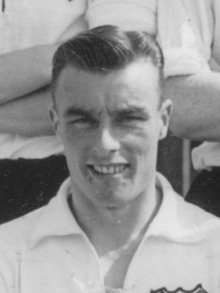 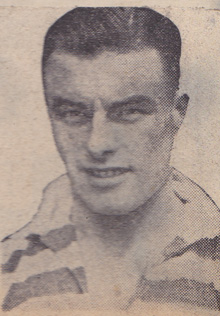 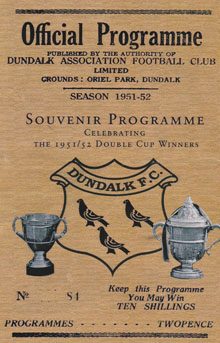 Although not making his club debut until late November 1948, and scoring twice in a Shield victory over Waterford, inside-left Paddy Mullen had been Shamrock Rovers’ Leading goal scorer in the 1948-49 (12 goals) and he repeated the feat in the 1949-50 (15 goals) season. In October 1949 his early season form earned an outing on the League of Ireland team that lost 1-0 to the Scottish League. But his only competition honour was a Shield medal in the 1949-50 season.

He moved to Shelbourne for the following term, but after netting a hat-trick on his debut in the City Cup against Waterford he became a bit player, making just 12 season appearances, only three of them in the League. [Shelbourne 12 appearances, 3 league, 5 Shield, 4 City Cup and 3 goals, all in City Cup.]

He made his Dundalk debut in February 1952, two weeks before the first round of the FAI Cup. His arrival as playmaker helped to transform the quality of the club’s midfield play and his nursing of a very young forward line was matched by the work of another Shamrock Rovers veteran, Mattie Clarke, leading the defence.

The reward was landing the club’s third FAI Cup, with a remarkably young team. Paddy’s goals book-ended the 19-goal campaign, when he sparked a first round recovery against St Patrick’s Athletic at Oriel Park, and closed the six-match journey when he delivered the final goal in the 3-0 replay victory over Cork Athletic.

He played a central role in each of the final replay goals, selling the Cork defence a dummy to create the opening for Johnny Fearon to score in the second minute, releasing Fergus Moloney on a run which ended with a 25-yard drive for the second goal and finishing the rout himself with seven minutes remaining with his own third campaign goal.

According to the Irish Independent match report “the first goal was the gem of the game. Seldom has one seen such a complete dummy sold to a defence as Mullen rushed through, and at the last minute, stepped over the ball and went on, leaving it teed up for Fearon to have an open pot as the defence went the wrong way.”

The Dundalk Democrat referred to his ‘brilliant movements, goal-making passes and that mystifying flash of speed for a cut-through’ and delighted in his ‘feints and dummies’. It once described him as ‘the unofficial player-coach, coaxing and encouraging his young colleagues’.