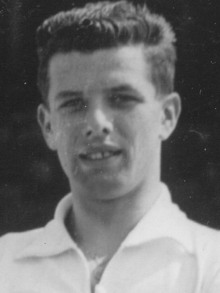 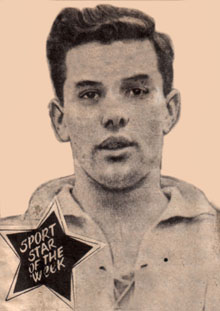 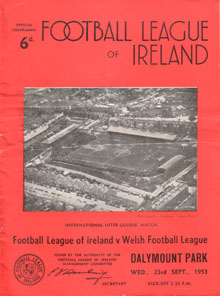 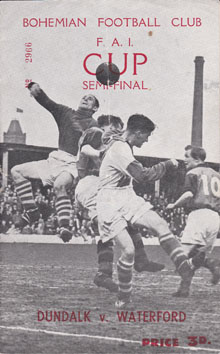 A promising Gaelic player as a schoolboy, Fergus captained his Dublin school to a Miller Shield victory in 1944. With Home Farm he was on a number of their trophy-winning teams including the Leinster Minor Cup in 1949-50.

It took a number of calls from the persistent Sam Prole before Fergus was on Dundalk’s books as a professional and was one of half a dozen players making their club debut in the opening game of the 1951-52 season. A goal from Fergus, and one from another new boy Brendan Fitzgerald, in a 2-1 win over Drumcondra brought the Presidents Cup to Dundalk after a lapse of 20 years.

On the following April, it was joined in the Oriel Park Trophy cabinet by a much bigger prize when the FAI Cup was brought home after a replay win over Cork Athletic—Fergus was again on the scoresheet in the 3-0 replay victory, his unstoppable picture goal from 25 yards in the 67th minute killing off the Corkmens’ comeback efforts.

Faced with tough opposition throughout the season for his favourite left-wing spot by Joe O’Brien, Tom McCabe, Peter McParland and Willy Quinlan, it was November before he could command a regular first team slot.

But he had a glorious year—Leading League scorer (8 goals), second in the all-games chart with 16 to Joe Martin’s 18 goals, Irish Independent’s Sports Star of the Week after his 3-goal contribution to the 2-match Cup semi-final win over Waterford and to end the season in style his selection, with Walter Durkan, on the League of Ireland team which defeated USA by 4-0 in early May.

He got another League of Ireland call-up the following September for a 3-0 victory over the Welsh League, in the company of Joe Ralph, but injuries restricted his season appearances to 9 games.

Shortly after playing his last club match in a Milltown League game in January 1954 he moved to the UK, taking up employment with De Havilands in their aerospace division. A successful trial with Luton Town lead to an offer of a trial period as a full time professional, but Fergus declined, having settled into his new job.

He played with De Haviland’s works team in the Hertfordshire League for a number of years and after an operation for a ruptured cruciate ligament he was attended to by Danny O’Donnell, physio to Dundalk’s 1949 FAI Cup winning squad.

After qualifying as an Electronics Engineer, he moved to Marconi, where he was taught to fly and obtained his pilot’s licence in 1969—in his retirement he divided his spare time between flying and golf, periodically sharing a round of golf with Peter McParland. He last visited Dundalk on the occasion of the 1952 FAI Cup Reunion in 2002 and nowadays through the internet he maintains contact with the club’s activities.

Irish Independent Sportstar of the Week (Apr 4th 1952) “His consistently good play was one of the main sources of inspiration in the dramatic fight-back in the Cup semi-final against Waterford. He provided the spark that kept the forward line going and thus paved the way for ultimate victory.”