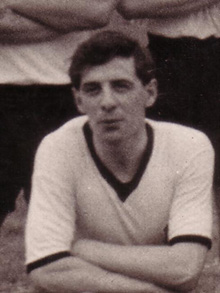 Educated at Sligo Model School and the Sligo Technical School, Victor’s local football experience was with Lawnview, Distillery and the works team of his employers, Henry Denny and Company. His League of Ireland entry was with the local Sligo Rovers in the 1952-53 season, but it was 1954-55 before he claimed a regular first team slot.

With a power-packed shot and his bustling tactics, he was always dangerous in the box. His breakthrough came in the 1957-58 year when his 20 goals for Sligo earned his selection on the League of Ireland team for the annual Inter League fixture against the Irish League in March 1958. At one stage on the brink of joining Sheffield United, he elected to stay at home. [Sligo goals: League 24; FAI Cup 1; Shield 13; All Games 38.]

His appointment as area manager for Denny’s in Cork in 1959 brought a stint with Cork Hibernians, but that was cut short when his job brought him to Dundalk. His short Cork stay, in the company of Charlie Tully, left him with an impressive record of 8 goals in 16 appearances.

He joined Dundalk in late November 1959, linking up with Kit Lawlor and Liam Munroe to drive Dundalk to its best League finish in years. Over the next two seasons he continued to chip in his share of goals with an illustrious set of partners—Liam Munroe, Jimmy Hasty, Jimmy McDonnell, Francie Callan and Willie Coleman. For Dundalk fans it was a golden era of goalscorers.

Victor later played with Bangor in the Irish League, where he linked up again with Charlie Tully, and he finished his career under Bertie Peacock at Coleraine. His League of Ireland career spanned ten seasons (from 1952-53 to 1961-62) and three clubs (Sligo, Cork Hibernians and Dundalk), during which he made 183 appearances and scored 72 goals.