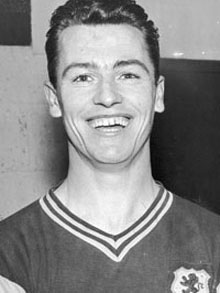 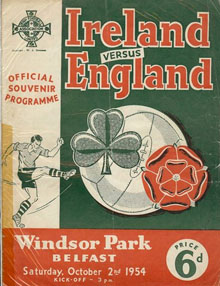 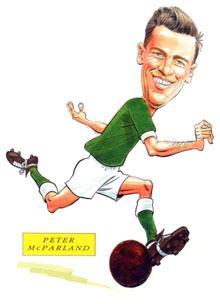 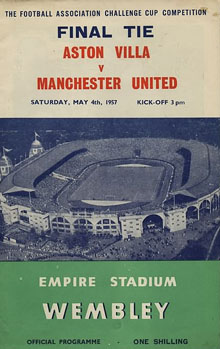 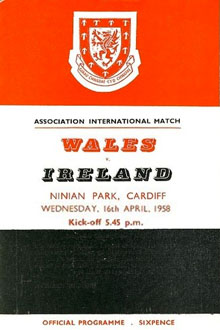 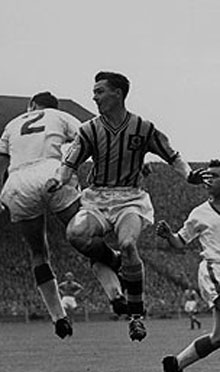 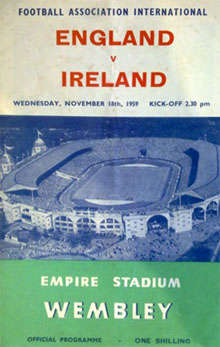 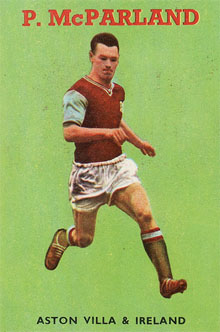 Peter McParland was with the Dundalk Minor squad that failed at the semi-final stage of both the Leinster and FAI Minor Cups in 1949-50. He was just 16 and a half years-old when he made his first team debut in a Leinster Senior Cup tie against Bohemians on September 20th 1950 and his two-goal debut in a 5-2 victory earned his retention for the next two games.

After an abortive trial with Leeds Utd—24 hours into a month’s trial at Elland Road the homesick McParland returned home—his career was taken over by Dundalk’s Sam Prole, who set him up with a job in the local Great Northern Railway Works as an apprentice coppersmith and arranged for young McParland to visit a local restaurant where a diet of steaks would help to fatten him up.

Under Sam’s watchful eye he spent most of his time with the reserves, where he scored plenty of goals. After hitting a half dozen in an 8-4 defeat of Grangegorman in March 1951, he scored a stunning goal in an end season friendly against Leeds United.

Playing on the left wing, he became a first team regular for the early stages of the 1951-52 League campaign, but after 12 matches on the trot until the end of January he lost out for the winning FAI Cup run and was 12th man for the Final. On his father’s advice, mindful of the Leeds experience, he turned down an offer to go to Leicester City.

With his local team Newry Shamrocks, he travelled to Birmingham to play a friendly against a similarly named club, where he impressed an Aston Villa scout. Notwithstanding strong interest from Southampton, Hull City and Birmingham, after the opening 5 games in the 1952-53 season, he was on his way to Villa Park and First Division Aston Villa.

Over the next 10 English seasons he became a Villa hero—‘Stop McParland and you stop Villa’ became the managerial briefing for Villa’s opponents. Tall and elegant, the poker-backed winger with a high stepping run and possessed of a powerful shot scored 120 goals with Villa over these ten seasons.

His 1957 FA Cup exploits alone earned him undying Villa fame: his series of thrilling goals brought them to Wembley and his two goals in the final against Manchester United—not to mention his robust shoulder charging of keeper Ray Wood—ensured that this final would go down as McParland’s match.

After Villa were demoted to the Second Division in 1959, he was instrumental in their immediate return—in one memorable match against Charlton he virtually made each of the first nine goals for his colleagues and then weighed in himself with two that were almost worth the others put together.

Only 20 when he made his Northern Ireland International debut, scoring twice, he was one of the sensations of the Peter Doherty-managed team that took the 1958 Swedish World Cup by storm, outperforming the other three British teams, and highlighted by McParland’s 2-goal act in the decisive play-off against Czechoslovakia.

Captain of his international squad, Danny Blanchflower said of him: ‘Peter’s inspirational play helped to put us on the world map. He used his brains to save his legs. He had a wonderful flair of turning defence into attack with one simple pass. Peter was the finest ever inside forward of British football.’

With Villa in 1961 he played in the first League Cup Final, contributing two goals to the 3-2 two-leg victory over Rotherham United.

Rated one of the best left-wingers of his era, he was honoured with selection to the Football League team in 1960 against the Italian League at Milan, in a forward line that also included Cliff Jones (Spurs), Jimmy McElroy (Burnley), Denis Law (Man City) and Johnny Haynes (Fulham). Always a man for the big occasions, Peter got his name on the score sheet.

After 12 English League seasons he spent two years with Southern League Worcester City (64-65 and 65-66) and during the summer of 1965 he had his first taste of foreign club competition when he lined out with Toronto Inter-Roma in the Eastern Canada Soccer League.

He returned to play with Atlanta Chiefs in the American Leagues for two seasons (‘67 and ‘68), winning a North American League Championship medal in 1968, and scoring two vital goals in the four match play-off series.

On his return from the States he became player-manager of Glentoran for three seasons, leading them to an Irish League Championship in 1969-70 and quitting at the beginning of the 1971-72 season.

By the time he hung up his playing boots he had played in almost 700 games and scored over 200 goals. He was particularly productive in the FA Cup, playing in 12 campaigns and knocking in 23 goals in 43 cup games.

Ever on the move he later had coaching spells in Cyprus, Kuwait, Libya and Hong Kong. His last trip back to Dundalk was in 2002 for the re-union of the 1952 FAI Cup winning squad. Retired and living in Bournemouth, Peter still visits Villa Park as an active member of the Villa former players association.

Apart from golf (he has been a member of Parkstone GC for over 30 years) he enjoys his trips to visit his two sons and grandchildren every other year in Tokyo and Melbourne. Like many exiles he follows the fortunes of Dundalk FC through the internet.

Describing his Villa career, Peter Harris, author of “From Aston Villa”, commented: “The audacity of McParland’s football, his drive and determination when he drives in on goal, and his amazing magnetism when the ‘half-chance’ is on and a goal desperately needed, make him an outstanding personality”.