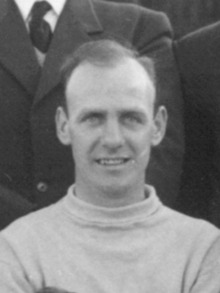 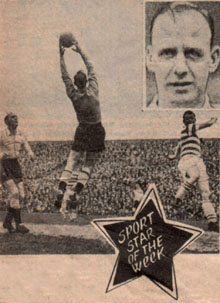 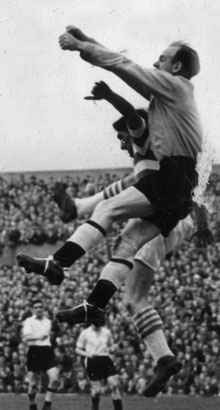 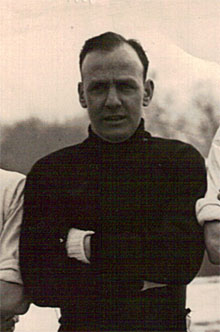 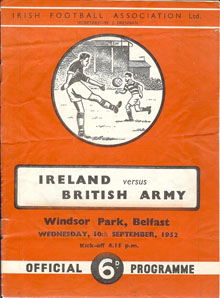 Warrenpoint-born Ted McNeill started his football career with GAA club St Peters, before moving to Warrenpoint United, donning the keeper’s jersey for the first time. After a switch to Newry Town he drew the attention of a number of English clubs and in early 1950 he spent three months on trial with Tottenham Hotspur.

On his return he was signed by Portadown and made his senior debut before the season ended, finishing with 5 appearances. He was an ever-present for the 1950-51 term (41 apps) and again in 1951-52 until signing for Sunderland in December 1951 (21 games).

Transferred for the then record fee for a keeper of £4,500, Sunderland at that time were known as the ‘Millionaire Club’ and had six keepers on their books and only four teams. If you lost your place on any of the sides for any reason, it took a while to get back. At one stage Ted was playing on the right wing with the Reserves and scored a goal from almost 30 yards out.

It was the end of October 1953 before he broke into the first team, earning promotion after the regular keeper had conceded six goals at Preston. In front of a defence that conceded on average over 2 goals per game, a 5-1 defeat at Burnley ended Ted’s run and he returned to Ireland after making 7 English League appearances.

In his three years at Sunderland he also made about 60 appearances with the Reserve and Combination league teams, winning a number of honours, Warham Senior Cup, Shipowners Cup, North Eastern league and the North Eastern Cup on two occasions.

Regularly touted for international honours he couldn’t dislodge the encumbent Harry Gregg, then with fourth division Doncaster Rovers. Returning to Portadown for the 1954-55 term, he never fully recovered from a pre-season injury and played his last Ports game in January 1955.

He was the fourth and last keeper to be started by Dundalk in the 1954-55 season, making his debut against Bohemians with half a dozen games left, and for the following four years he was an automatic selection—alternate choices like Paddy Shevlin and Paddy Neville were dependent on Ted’s rare absences through injury for the odd game.

The mid-50s marked the club’s lowest ebb with a League ranking rarely out of the bottom three—and a defensive record to match. But the Summer 1956 acquisition of the street-wise Drumcondra defenders, Johnny Robinson and Shay Noonan, brought about a big change.

With Ted at the top of his form, and the local duo of Ralph-Finn nailing down the full-back spots, the team swept through the 1957-58 FAI Cup campaign, keeping a clean sheet throughout the 5 games, and defeated the mighty Shamrock Rovers—Coad’s Colts—in the final.

McNeill had a magnificent game with a performance that had him nominated Sport Star of the Week by the Irish Independent.

The turning point in the final came when Rovers were awarded a penalty shortly after Dundalk had taken the lead. The usually reliable Liam Hennessy shot wide from the spot—put off by Ted’s distracting tactics, involving his cap and his gloves!

In his last season he was standby for the newly arrived Christy Barron. Ted was one of the most popular players of his era and only five custodians in the club’s history have surpassed his 138 club appearances that at the time set a new mark for goalkeeper appearances. On the small side for a goalkeeper, he compensated with his agility and bravery.

He was never honoured with selection to the League of Ireland team but was a travelling reserve for the League’s two-match trip to play the German Hesse League in May 1955. While with Sunderland he had been capped with the Ireland XI in a 2-3 defeat to the British Army.

In his capacity as the leader of the Warrenpoint Brass Band he was a popular visitor to Oriel Park for many years and he never missed a European night until a heart attack in the 1980s restricted his movement.

Irish Independent’s Sportstar of the Week (25th April 1958) citation: “McNeill was the outstanding figure in his club’s FAI Cup final success last Sunday and the acme of steadiness, brimful of confidence in his fielding over-head, sure in his advances and agile when he crossed the goal like a cat to save from Ambrose”