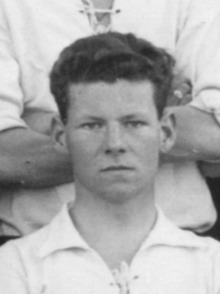 Right-winger Niall McGahon, fresh from a season playing with UCD in the Leinster Senior League, transferred to Dundalk at the end of the 1956-57 year, hoping to get a few tail-end Reserve games. Instead he found himself on first team duty, playing in the last two League games and scoring on his debut against Shelbourne at Oriel Park, shortly after his 18th birthday.

Born into a Dundalk family with a long football tradition—his father was a club director for 13 seasons and Medical Officer for 25—Niall’s early football in the local minor leagues was with Castle Rovers and Spurs, and with Junior club AOH.

Leo McDonagh opened the 1957-58 season in his favourite right wing spot but after two games switched to right-half, where he would remain for the rest of his Dundalk career. Niall took over the wing spot and goals in each of his first three outings secured an 8-match run before losing his place to Mick Murray.

But on the strength of his Reserve performances he was back in March, and became an ever-present to the end of the season, sharing in the glory of the club’s third success in the FAI Cup. The fullback partners, Joe Ralph and Ken Finn, were the only other locals on the team that defeated red-hot favourites Shamrock Rovers in the final and Niall had contributed a goal to the 3-0 second round replay victory over Limerick.

Only George Toner exceeded his 9 season goals and in his two club seasons he had an exceptional strike rate for a winger—10 goals in his 22 first team games.

Niall returned to play with UCD for another six seasons and enjoyed further success in the Dundalk and District Leagues with St Patricks. His love of football, and of the club, saw him turn out regularly with the reserves until the 1966-67 season.

An accountant with his own practice, he has been one of the leading lights in the Dundalk musical and choral scene for many years and his fine tenor voice has enriched many performances, locally, nationally and internationally.