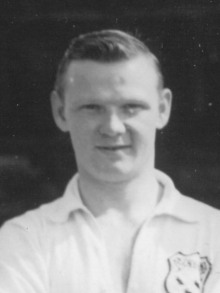 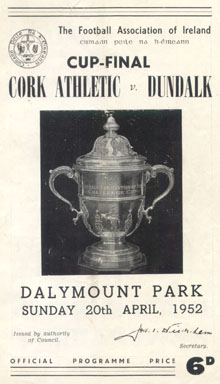 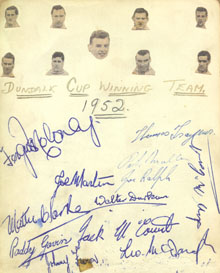 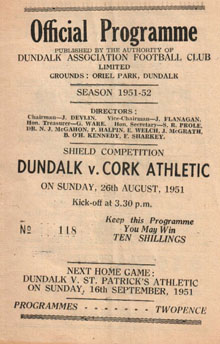 Jackie McCourt’s first Oriel Park ventures were with the 1949-50 Minor team, which featured a whole bunch of future Dundalk stalwarts and a number of future International players. With the Reserves for the following season, his first team opportunity, (for a Shield game against Transport in November 1951) came as a result of a rash of injuries.

Jackie grabbed his chance and made the right-half spot his own for the rest of the season, playing in all six FAI Cup ties and picking up a winner’s medal when Dundalk defeated Cork Athletic in a replay.

Jackie’s father, team trainer Gerry, had two FAI Cup Runner up medals from the 1931 and 1935 finals.

Strong running and wholehearted, he was the perfect team man and, while there were no more club honours for Jackie or the club during his remaining 4 seasons with Dundalk, for club supporters he became one of the 1950s heroes. After the departure of Mattie Clark, Jackie frequently lined out in the centre-half spot.

For the 1956-57 season he joined Sam Prole’s Drumcondra and was converted to an inside forward, chipping in 10 League goals as Drums finished runner-up to Shamrock Rovers. But before the season ended there was quick revenge when Jackie added a second FAI Cup winner’s medal to his collection after Drums defeated Rovers in the final.

Playing at inside left, he had fellow townsman Willie Coleman as his left wing partner and his last minute goal in the second round tie against non-League Workman’s Club had saved a lot of blushes around Tolka Park.

His medal collection was completed the following year when Drums reversed the finishing League positions, claiming the Championship with a 2-point margin over their great rivals of the era.

He returned to Oriel Park for the 1959-60 season, lining out at inside left, but nagging injuries and the acquisition of Liam Munroe and Kit Lawlor in October brought Jackie’s Dundalk career to a close after he had played just seven games, most in the Shield.

He later moved to the USA, settling initially in New Jersey, playing part time with a team called German-Hungarian and getting involved in the development and coaching of youth’s teams.

Jackie kept himself very fit and played at senior level for many years, participating at various over-age levels—over-30, over-40, over-50—continuing until he was 75 years old. His children and grandchildren have followed the family tradition and one of his granddaughters has been voted the best player in New Jersey.

His last visit home to Dundalk was for the 50th Reunion Celebrations of the 1952 Cup Winners in the Spring of 2002.

His older brother Frank, who played with Dundalk and Shamrock Rovers in the early 1940s, had a successful English League career (105 League appearances with three clubs, Bristol Rovers, Manchester City and Colchester United) and earned 6 International Caps with Northern Ireland

Jackie’s performances in the 1952 FAI Final and replay lead to the Dundalk Democrat comparing him to Kid Berg the world boxing champion: ‘The Kid Berg of football, for Kid Berg never let up, from the first bell to the last.’