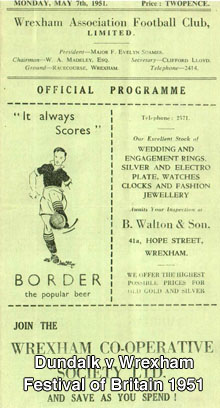 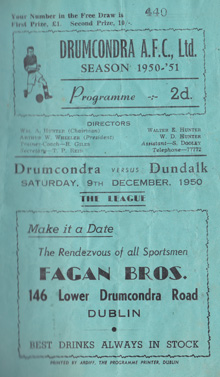 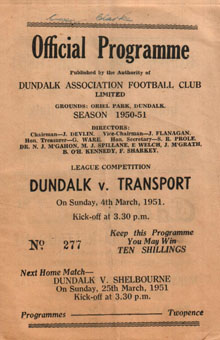 The Dundalk Minor team of 1949-50 threw up more future stars than any other previous club squad—one of them was Youth International Sean McCarthy, whose cap, in the company of Walter Durkan, came at Anfield when the Irish Youths defeated their Liverpool County counterparts before an attendance of 20,000. A year later Sean was captain of the Irish Youths in another Liverpool victory, this time at Goodison Park.

These were the first caps earned by Dundalk players at this level. Sean came to the attention of the selectors during the Dundalk Minor team’s successful runs to the semi-finals of both the FAI and Leinster Minor Cups.

Injuries to a number of first-teamers and the resting of some players before the Leinster Senior Cup final on St Stephen’s Day opened the way for Sean to make his senior debut at right-half back for a League game against Transport on December 24th 1950.

A porous defence, which had conceded 25 goals in ten consecutive Shield and League games, gave Sean his shot at the centre-half spot a few weeks later, replacing Jimmy Field. He stayed there for the balance of the season and was one of the successes of the 5-match Festival of Britain tour in May 1951.

On the opening day of the 1951-52 year he pocketed a Presidents Cup medal when Drumcondra were defeated 2-1 in the final. With Paddy Kelly and later Mattie Clark taking the centre half spot, Sean became a regular at inside right until the end of January, but he lost out on the successful FAI Cup run with the signing of Paddy Mullen.

In the mid-50s he played with Transport but early in the 1957-58 he got a distress call from Leinster League Longford Town after they lost their regular centre-half through injury. Sean made the centre-half spot his own and in a memorable Town season he captained the team to success in the Metropolitan Cup and came close to Leinster League honours.

He came to the notice of senior clubs and ended up for the 1958-59 season with St Patrick’s Athletic, but didn’t make the first team for the Pats FAI Cup victory after defeating Waterford in a replay. He got his chance early in 1959-60, in the absence of Jimmy Dunne and he became a regular first-teamer during the march to Shield victory.

Now in his favourite centre half spot, he was on the League of Ireland team that played the Football League in September 1960 and he anchored the Pats defence that failed by just a point to catch League Champs Drumcondra.

But there was ample compensation when the Inchicore men took the 1961 FAI Cup, defeating Drumcondra in the final and Sean, in the company of Jimmy Redmond, finally got the coveted FAI Cup winner’s medal.

For many years he was a member of the Dublin Fire Brigade service.

The man from the Democrat was sweet on youth player Sean McCarthy, and promoted his elevation to first team status: “Coolness is not the least amazing of his qualities… has great ability and some think he’s too good to be off the first team. But if I were his friend I would tell him to get rid of the ball more quickly in his own goal area …. That’s about all I find wrong with the lad.”

He was in a I-told-you-so mood when later McCarthy reportedly played brilliantly against Shamrock Rovers, noting “…his coolness and resource in all emergencies were notable”.