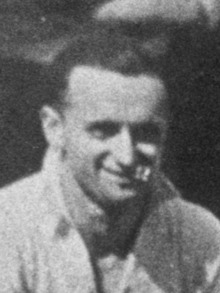 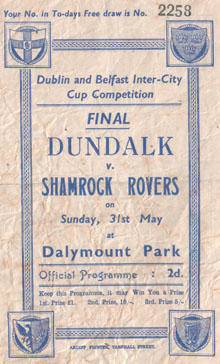 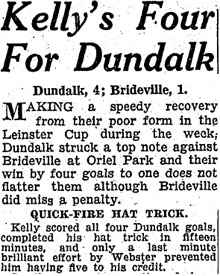 Artie Kelly, playing with St Vincent de Paul PE school in the Belfast Juvenile Leagues, started his football career at centre-half but by the time he graduated to the Amateur League with Ewarts Recreation Club he was a prolific goalscoring centre-forward. By 1935 he was at Celtic Park honing his skills with Celtic Seconds and adding further to his reputation as a goalscorer.

He was a member of the all-conquering Belfast Celtic squad under player-manager Elisha Scott that dominated Irish League football from the mid-30s. However, during this period Celtic were gifted with an abundance of prolific strikers, including Jimmy Turnbull and Peter O’Connor, and Artie had to work hard to get a decent first team run.

The 1940-41 Celtic panel was arguably its greatest ever—Breen, McMillan, Fulton, Walker, Vernon, Leathem, Kernaghan, Kelly, O’Connor, McAlinden, McIlroy—scoring 104 goals in the 27-game League campaign and landing the League-Cup double, defeating arch-rivals Linfield in the Irish Cup final. During the summer of 1941 he and Johnny Leathem signed for Dundalk.

Hat tricks in each of his second and third club appearances signalled a memorable season—both for Artie and for Dundalk. On November 30th his four goals against Brideville at Oriel Park equalled Eddie Carroll’s 1928 club best in a League game.

But it was his Cup goals that made this a very special season—scores in the first round of the FAI Cup against Distillery and another one in the 2-1 semi-final win over Shamrock Rovers, capped by two in the 3-1 final win over Cork United that delivered the club’s first FAI Cup.

And to complete a memorable year he scored another four times in the Inter City Cup campaign including the only score in the 1-0 Final triumph over Shamrock Rovers. Only two players, Joe Sayers and Eddie Carroll, have topped his season haul of 35 goals.

With Glentoran for the following year he came close to three Cup wins in a row, failing at the last hurdle, losing in the final of the Irish Cup to his old club, Belfast Celtic. His 41 goals for Glentoran from 36 appearances included a double hat trick in a 9-3 win over Cliftonville and gave him an exceptional two-season record of 76 goals in 81 games.

A year later he was back with Celtic, appearing in his fourth Cup final on the bounce: this time he scored in the final of the Irish Cup when the Celts defeated Linfield. He spent the first post war season of 1945-46 with York City without making a first team appearance and for the following year he was with Barrow, scoring twice in 8 appearances, before returning to Coleraine.

From the Ligoniel area, he worked in the Central Post Office in Belfast.