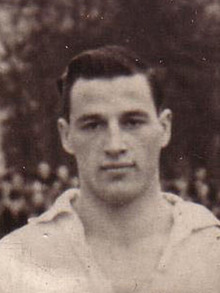 The summer of 1948 saw two sets of new arrivals at Oriel Park. A set of new full time professionals—mainly from Scotland—and about a dozen wet-behind-the-ears Dublin Juniors. The Scots would bring home the trophies and their wage bill lead to the club becoming almost bankrupt—the juniors would provide the seed corn and, in time, the transfer fees that would save the club.

Amongst that latter group were Junior International wingers, Terry Murray and Eddie O’Hara, and Jim Higgins, centre forward from the Dublin nursery Home Farm. Jim had started as a 14-year old with Dublin Schoolboys club Haroldsville, before switching to Home Farm.

It was League time before Jim made his debut, scoring in the opening League match in Limerick in the middle of December, lost 3-2. Eddie O’Hara scored Dundalk’s second goal and their names would become inter-linked at three different clubs over the next half-dozen seasons.

Jim was retained for the following 5 games, giving way after a major shake up that saw centre half Ronnie Henderson moving to centre forward. Jim played no further part in the first team, playing the season out in the reserves.

With practically all the 1949 FAI Cup-winning team either transferred or released, Jim had a clear run for the next season and grabbed his chance. An opening goal in the Presidents Cup against Drumcondra was followed a week later by a hat trick in Waterford, with Eddie O’Hara also on the score sheet. A brace against Shelbourne in the City Cup gave Jim 6 goals before August was out.

He was selected on the Irish International team to play against Finland in September but injury forced him out. He marked his return from injury with another hat trick against Waterford —Terry Murray also scored three in a 7-3 Oriel Park romp.

At this stage the scout’s notebooks were beginning to run out of pages and Eddie O’Hara’s name was also taking up space. Eddie’s hat trick against Bohemians on November 12th brought a bid for both Higgins and O’Hara from Birmingham and within a week they were both on their way to St Andrews reported as being “for the club’s biggest-ever fee”.

Over the next 4 seasons at Birmingham Jim appeared in 50 League games and scored 12 times, and is best remembered for his 45-second FA Cup goal against Manchester United in 1951 which earned a semi-final spot for the Blues.

He also got his Irish cap playing at inside right for the visit of Argentina to Dalymount Park in May 1951.

In July 1953 he moved to Hereford United, then playing in the Southern League, again linking up with Eddie O’Hara, but after a few games he suffered a chest injury that sidelined him until December. As a result he made just 23 appearances (4 goals) and at the end of the season he returned to Oriel Park. His last couple of Oriel Park seasons were plagued by injuries.

During the 1970s his son Tony played with a number of League of Ireland clubs including Home Farm, Bohemians, Waterford, Shelbourne and St Patrick’s Athletic. Highlight of his career was with Home Farm while winning the FAI Cup in 1975, the first amateur team to do so in 40 years.