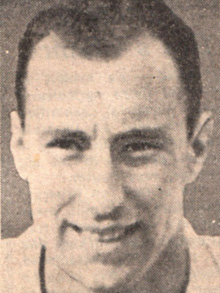 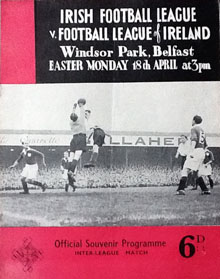 Recruited from Raith Rovers, centre half Ronnie Henderson was one of the first signings made by new coach Ned Weir when he took charge of Dundalk’s affairs for the 1948-49 season. Ronnie had spent the previous two seasons with Raith, with 18 club appearances. By the end of October the City Cup was on the Oriel Park sideboard and four wins from the opening five Shield games pointed to another trophy.

But when the next two months went by without a win it was time for changes. Mick Skevington was switched from full-back to centre-half and Big Ronnie was relegated to the reserves, where he moved to centre forward.

For the January League game against Shamrock Rovers Ronnie was back on first team duty at centre forward. Wins and goals began to flow, pushing the team up to the top of the League table and Ronnie helped himself to a few in advance of the FAI Cup first round tie against Cork Athletic, where his brace contributed to a 4-1 win and confirmed his position as leader of the line for the rest of the season.

His bustling play and strength in the air provided plenty of opportunities for the rest of the line. He continued to score in the Cup, with one each in the Drums tie and replay, and his goal just before half-time in the final, to give Dundalk a 2-0 interval lead, killed off a spirited Shelbourne revival. His five campaign goals equalled the club record set in 1931 by Gerry McCourt. A week after the Cup final Ronnie was further rewarded with his selection on the League of Ireland team, scoring in a 4-1 loss against the Irish League.

The season closed with a 3-0 defeat in the final of the Inter City Cup, the last time this competition was played, and a runner-up medal to add to the winner’s secured in the City and FAI Cups. Ronnie’s contribution was two goals in the 3-1 semi-final victory over Bohemians. Unfortunately, the cost of the ‘Scottish’ team had been too much for the club’s bank, and a May friendly against St Mirren was the last time that the patrons of Oriel Park had the opportunity of seeing the 1949 Cup heroes in action.

Over the next two seasons Ronnie was on the books of Alloa and later Newport County—but the glory days were over and he failed to make a first team appearance with either club.

Described as a ‘Fifer in all but birth’, Ronnie was born in Manchester where his father, centre-forward Bill, had spent a number of seasons at Manchester United. Edinburgh born Bill Henderson’s professional career had brought him to St Bernard’s, Airdrieonians, Manchester United, Preston North End, Clapton Orient, Heart of Midlothian, Morton, Torquay United and Exeter City.

When he went to centre forward in the New Year in a League game against Shamrock Rovers, and scored, the Demo was impressed: “His speed and bustling play certainly unsettled the Rovers defence and his distribution, particularly with his head, was good. Great with high balls, nodding them down to a teammate. With Walsh back in the line, I think we have a good Cup team. And more from the Democrat: “The big fellow is my idea of a centre-forward, bustling the defence, yet not depending solely on his physique, but showing considerable skill in gathering the ball and slipping it about to his fellow forward.”