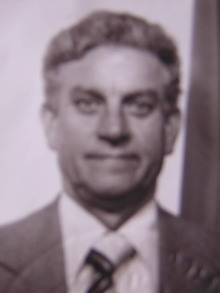 From Inchicore, Jimmy had been a member of the St Patrick’s Athletic Minor team that won the FAI Youths Cup in 1945, defeating Bohemian Minors in the final, before moving on to Pat’s Leinster Senior League team. While working with CIE as an apprentice electrician at the company’s Inchicore Works he participated in their Inter-Departmental Summer League.

He arrived at Oriel Park in August 1947, making his reserve team debut against Grangegorman and was the second Inchicore men to be with Dundalk this season, Dessie Byrne being in his second season. Small and wiry, Jimmy was exceptionally fast with delightful ball skills and was adept at cutting in from the flank and creating scoring opportunities.

Joe O’Brien was the regular left-winger and after his November transfer to Luton Town, Jimmy was immediately drafted into the first team, making his debut in the last Shield game on November 23rd against Bohemians at Dalymount Park.

He remained on the left wing for the balance of the season helping the club to runner up spot in the League, a point behind Drumcondra, and being selected on the League of Ireland team to play in a showpiece fixture against the Scottish League at Dalymount Park on April 24th 1948. A week later he was transferred to English League Division 1 Middlesbrough for a reported fee of £2,500, having played just 17 senior games and scored 3 goals.

Jimmy was the fifth Dundalk player transferred to English League clubs during the season—the club’s year-end accounts showed net transfer fees of £6,350 ( over €200,000 in today’s money values) for Joe O’Brien, Jimmy McEvoy, Tommy Clinton and Jimmy Hartnett, while Hugh McDaniel went to Bradford for a trial.

He scored on his ‘Boro debut the following February, but is best remembered that season for his hat trick against Sheffield United in April, when a 3-1 win saved the club from relegation, escaping the drop with just a point to spare.

Over 7 seasons at Ayresome Park he was twice transfer-listed, and spent periods with Barry Town (Welsh League) and King’s Lynn (Eastern Counties League), finishing in 1954-55 when Boro were relegated from Division One, with a club record of 48 League appearances and 8 goals. His last club game was on Jan 8th 1955 in a 4-1 FA Third Round defeat by Notts County.

With Barry Town in 1955, he also spent a second period with King’s Lynn, linking up with another ex-Dundalk player Terry Murray, but he returned to English League football with Hartlepools for the 1957-58 year, making 7 appearances and scoring once.

Against Spain in June 1949 he got his first Irish cap—almost five years later, in March 1954, he got his last International call-up against Luxembourg. Making his debut that day was Tommy Traynor, and the 1-0 victory marked Ireland’s first World Cup win away from home. He returned to Dundalk in May 1954 to play in Johnny Fearon’s Benefit, joining a number of his former Dundalk colleagues for a gala occasion.

When his playing days were over Jimmy worked for 20 years as an electrician at ICI Wilton in Middlesbrough, alongside his close friend and football colleague, Wilf Mannion, and later at Seal Sands in Greythorpes, Hartlepool helping to build Oil Rig Platforms.

A very fine singer, he became active in the Irish and Catholic Communities, including coaching young footballers attached to his local Church, and he performed at many charity events throughout the Middlesbrough area.

His two Irish International Caps and one of his Irish jerseys are on display at the Riverside Stadium, Middlesbrough, on loan from his family. His eldest son Pat is a Parish Priest in York while another son Jim, and Jim’s two children Adam and Luke, are Middlesbrough season ticket holders.

Jimmy died in 1988 when complications set in after being admitted to hospital for an exploratory operation.

“Hits the ball crisply and has a grand left foot…If this boy doesn’t make a big success, I’m a Dutch chocolate” was the colourful opinion of the man from the Dundalk Democrat after watching left-winger Jimmy Hartnett play with Dundalk Reserves early in the 1947-48 season.