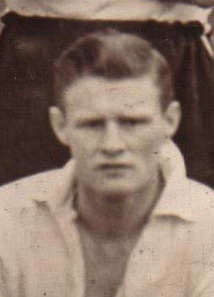 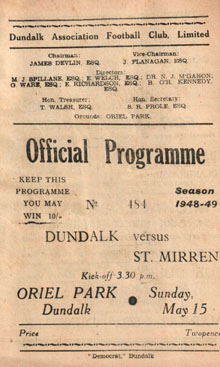 Scotsman Eddie Hamilton, whose father had played with Shelbourne, was inside-left on the FAI Cup winning team in 1949 which was backboned by five of his countrymen, had a Scottish physio and coached by an Irishman recruited from Scotland—hence the title of the ‘Scottish ‘ team.

However, Eddie had arrived in Oriel Park a full 12 months before this team. Recruited from Dublin junior club Iona CYMS, who had been defeated by Waterford Hibs in the FAI Junior Cup final, he made an immediate impact at the beginning of the 1947-48 season.

With Johnny Matthews behind him and Peadar Walsh at centre forward, Eddie scored on the opening day fixture against Drumcondra in the City Cup and in five of the seven City Cup games, earning a runner up medal after a single loss against the winners Shamrock Rovers. He played in 30 of the 32 season matches, and added a League runner up medal to his earlier one when Dundalk failed by a point to catch pace-setters Drumcondra.

He was a late arrival the following season, missing the City Cup win, but by the beginning of the League his name was on every team sheet and he played a starring role in the FAI Cup campaign, which finished with the club’s second success, defeating Shelbourne 3-0 in the Final, and chipping in a couple of goals along the way.

Capped by the League of Ireland for the annual St Patrick’s Day fixture with the Irish League, he was the first of the Scottish team to depart, being transferred to Barnsley in April and missed the Inter City Cup campaign.

With Division Two Barnsley for the 1949-50 season, he was called upon once for League duty and returned to Ireland to play with St Patrick’s Athletic. He made a second attempt at the English League in 1953 with Second Division Rotherham United but failed to make the first team.

“Has a good knowledge of the game and has a strong shot. He is, however, of rather light physique … but events may prove that our Dublin scouts did a shrewd piece of business in beating Dublin club’s for his signature. He has good ball control and knows how to find the net.” Very early in his first season in the Dundalk Democrat.

On his performance in the FAI Cup final “Played another game of the greatest worth, both in attack and defence. He was very strong in what footballers call ‘grafting’ and he was constantly boring into Shelbourne’s defence. Many thought him the best player afield.”